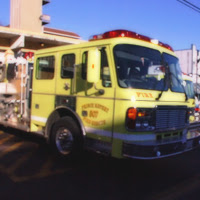 The Daily News finally took its turn at covering the early Saturday morning fire at the Kin Hut and examining the spate of recent fires in the community.
.
The RCMP provided a few details on the recent fires and expressed concern that somebody was going to get hurt should these incidents continue.
The Daily provided their findings in the Wednesday paper.
Alarm raised after spate of arsons
By Christian Webber
The Daily News
Wednesday, August 29, 2007
The latest in a rash of arsons was set on the weekend at the building next to the skate park known as Kin Hut.
The blaze failed to get going but was the latest in a rash of arsons and attempted arsons recently that have hit various targets
There have been other recent fires, most notably, the Casino, said Corporal Steve Vrolyk, with the Prince Rupert RCMP.
Two other recent fires worth noting, said Vrolyk, were on August 23 at about 3 a.m., there were two vehicles that appeared to have been lit on fire on the 600 block of 7th Ave. West.
He said on July 20 someone attempted to set a playground structure at the Conrad Elementary School on fire and so far those are the big ones.
"We are continuing our investigation, there is nothing to indicate any specific link between the fires, obviously we are investigating to try and attempt to determine, both the cause and if there is a link, we don't have anything at this point to say that there is a link between the fires," said Vrolyk.
He said he couldn't release how they set the fires because the information may be necessary for court. Although upon investigation the damage at the Kin Hut was minimal. Vrolyk didn't know the extent of the damage in a dollar amount.
"Our investigation is continuing, if people have information they can contact the Prince Rupert RCMP," he said.
Posted by . at 9:40 pm