Just in time for the end of summer, Diana Lake gets a clean up 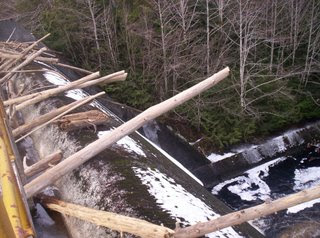 With the days at the beach beginning to dwindle and school just around the corner, the most used recreation area in the region finally got a makeover.

Port Edward Council took a look at the long standing irritant, which featured Sun Wave Forest Products taking it’s time in cleaning up the Diana Lake park site. In recent weeks BC Parks and Sun Wave finally got to the task at hand and cleaned up the massive amount of logs that had littered the beach area over the last three years or so.

BC Parks expressed some frustration with the local owner of the currently closed pulp mill, listing a number of excuses that they provided for not being able to launch a major clean up of the beach area of the park.

Port Ed Council for its part is hoping that this will be the beginning of more frequent and timely clean up of the park and that the scenario of logs piling up over the course of a couple of years won’t be replayed.

With the issue of logs on the beach an ongoing and seasonal concern, it’s hoped that the company becomes a bit better corporate citizen and is more proactive in its efforts to clean up the park area.


The Daily News examined the story in Thursday’s paper.

For the first time in three years, Diana Lake almost looks presentable. But just because the scattered logs that dominated the beach have finally been moved doesn’t mean the lake has a perfect bill of health.

That issue was discussed in full at Port Edward Council Tuesday night as Brian Last from B. C. Parks attended the meeting.

Even though it seems like summer just arrived, winter’s arrival is inevitable, and with it, more fallen logs up against the dam and on the shoreline.

Port Edward wants to be certain the problem doesn’t bog down for another three years in the future.

“The first thing I’d like to say is thank you,” said Mayor Dave MacDonald. “They went in and cleaned up the logs.

“But the question now is… what do we do next time? Whose responsibility is it, and when is a decision made to clean the park?

In response, Last, area supervisor for the Skeena/Nass region, echoed the exact same statements that councilors have made over the past three years – Sun Wave, the new owners of the former mill known as Skeena Cellulose, are supposed to be in charge.

“Sun Wave has the park keys, and they have the liability,” said Last. “(Prior) to the (park’s) opening on May 15 they dragged their feet on it, and then they said the equipment was delayed due to the flooding, and the, they had to repair the log jam.”

Eventually, B. C. Parks got together with Sun Wave to finally clear out the biggest mess of logs that were closing up the beach, but that only happened recently, with summer almost over.

Last, along with Port Edward Council, is hoping that in future years Sun Wave does a better job of taking care of the mess.

“We’re hoping that Sun Wave will be better at getting at it sooner,” he said.

Due to the mill’s closure in the late 1990’s, the neglect on the part of Skeena Cellulose and now Sun Wave up at Diana Lake has led to the deterioration of the beach area, and Port Edward would love to see the beach restored to its original glory.

After, it is the only valid picnic summer area with swimming facilities near Prince Rupert.

Last said that the beach is on their list of parks that need upgrading at Diana Lake. This includes dealing with the road, some drainage issues, and some culverts. But council reiterated that the beach has to be at the top of that list.

“It’s the focal point of being there,” said Coun. Murray Kristoff . “If you can’t use it, you’ll go somewhere else.”

“Considering it’s the only one of its kind between here and Terrace, I think it’s worthwhile. Something needs to be done.”

MacDonald added: “I can put up with a bumpy road as long as the beach is something we can use.”
Last said at upcoming capital upgrade meetings, he will broach the subject of Diana Lake, and will arrange to have connecting discussions with Port Edward Council on the issue.
Posted by . at 10:56 pm