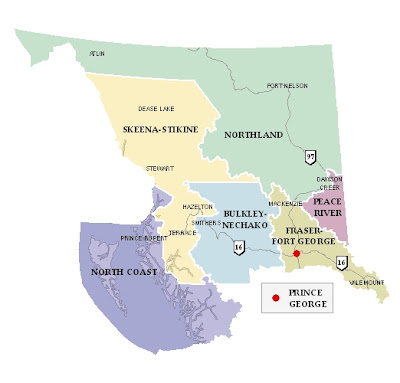 The movement to reverse the Electoral commission plans to reduce in the north to increase in the south has gained an ally in the City of Prince Rupert.

The Daily News had a front page story Wednesday, on the backlash in the North over the B.C. Electoral Boundary Commission plans.

WAVE OF OUTRAGE SWEEPING THE NORTH OVER PROPOSALS
By Leanne Ritchie
The Daily News
Wednesday, August 29, 2007
Page one
Prince Rupert city council will be joining political leaders from across the north in protest against a report that recommends decreasing rural representation in the provincial legislature.
"We're collectively voicing our concern over the suggestion that the boundaries be realigned such that the north and rural communities have less representation in the legislature," said Eileen Benedict, the president of the North Central Municipal Association (NCMA).
The NCMA is a group that represents municipalities throughout northern B.C.
"The suggested boundaries create such huge ridings that the MLAs in those ridings would be extremely hard pressed to provide fair representation to those living in such a vast area."
The B.C. Electoral Boundary Commission has proposed reducing the number of rural ridings by three because the population in the region is smaller in those ridings than ridings in the Lower Mainland.
At an NCMA meeting in Prince George this past weekend, which included Prince Rupert city councilor Joy Thorkelson, all the city representatives in the North agreed to fight the proposal. They joined northern MLAs - both Liberal and NDP - who are also opposed to the proposal.
Thorkelson said Bulkley Valley MLA Dennis McKay spoke at the meeting about his concern for the growth in his riding and the fact it would make the region so geographically large, he would not be able to represent his constituents.
The city will seek the support of other municipal politicians at a provincial convention in September.
"This isn't just an issue for the North but for all rural areas of the province that will have less of a voice in the decision-making process if the recommendations are adopted," said Murry Krause, vice-president of the NCMA.
"The NCMA region will actually be losing two MLA's and this is totally unacceptable".
The commission has suggested reducing the number of ridings in the North from eight to seven, reducing the Cariboo-Thompson region from five to four and also taking another riding away from Columbia Kootenay.
At the same time, the commission has recommended four new ridings in the Lower Mainland.
"We can't underscore enough how much outrage is being voiced in the rural parts of the province over this suggestion," said Benedict who added, "this is particularly discouraging because we know that the province's vast wealth is primarily generated from the northern and rural areas of the province."
Benedict will attend and speak at a large rally planned for electoral boundary commission hearings in Prince George Sept. 5.
She will also present arguments to the Electoral Boundaries Commission at the public meeting.
There is a hearing on the proposal in Terrace scheduled for October.
Prince Rupert city, along with some 20 other interested stakeholders, presented its concerns during a meeting earlier this year.
As a consequence, the North Coast riding has been given a special exemption because of its large geographic size and isolated communities.
Posted by . at 12:55 am