Looking for an action plan for the ocean 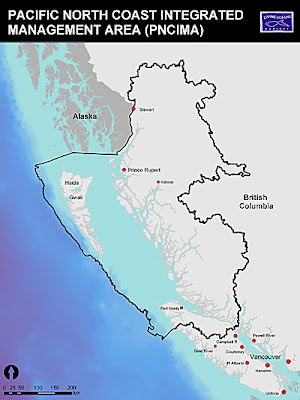 The fate of our ocean resources was the topic of discussion Wednesday night at a community meeting held by the Marine Planning Caucus, which hosted a two hour meeting at the Crest hotel.
.
Discussions on marine planning and the proposed Pacific North Coast Integrated Management Area planning process took place, as the delegate looked to find a better way of taking part in the Marine planning process.

STAKEHOLDERS LOOK FOR BEST WAY TO MANAGE THE OCEAN
Delegates gather to discuss ways to protect and enhance ocean’s resources
By Kris Schumacher
The Daily News
Thursday, August 30, 2007
Pages one and three

Last night’s community meeting to hear public perspectives on marine planning was well attended and brought up a number of different local concerns that will be considered as a part of Canada’s Oceans Action Plan.

The evening began with a talk from Brian Fuhr of the B. C. Ministry of Environment, who shared his experiences working on land-use planning, in order to give members of the public a better understanding of what will be involved in the marine planning process.

“Land use planning started out of controversies and government’s desire, and the people’s desire, to fix that and come up with something that makes more sense,” said Fuhr. “The fate of ocean resources is probably one of the things that’s motivated you to come here, what you’ve seen on the South Coast, and what you’ve hear about around the world. People just don’t want to follow that path, we want to see what we can do to improve that.”

After giving a brief history of land use planning in the province, Fuhr talked about some of what he referred to as the “ugly stuff” that has to be thought about for both land-use and marine planning, such as government’s role in the process, drafting a workable mandate, putting mechanisms for enactment in place, the need for contacts as well as training and other logistical aspects of planning.

There was a great deal of interest expressed from all the stakeholders gathered about how the government will be going about drafting its Pacific North Coast Integrated Management Area planning, and how the public’s concerns will be incorporated into the planning process.

“We as a group of ENGO’s need input to design a process, and to have a good process. You need to get the input from the people who work and live on the coast,” said Kate Willis of the Living Oceans Society.

“That’s the first step, really identifying that, and there hasn’t been any process yet to get that input, and we felt that it’s critical to get that input early, and this is just a start to get that information and our commitment is to share that with governments,” said Willis.

The gathered stakeholders were later broken up into smaller groups with specific shared interests, such as ‘government’, ‘transportation’, ‘science’ and ‘conservation’, and several others. Each group drafted lists of what issues they thought should be brought before the federal government when drafting marine planning for the PNCIMA.

The B. C. ENGO Marine Planning Caucus consists of the Canadian Parks and Wilderness Society, David Suzuki Foundation, Living Oceans Society, Sierra Club of Canada and WWF-Canada, who have all been working collaboratively since 2005 to advance marine planning on Canada’s Pacific Coast.
Posted by . at 8:57 pm