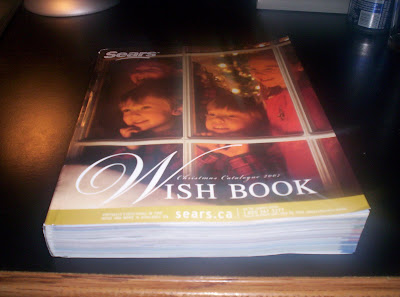 I swear this thing comes earlier and earlier each year.
The countdown apparently is on, The Sears Wish Book, 2007 edition arrived on Podunkian doorsteps yesterday.
A weighty tome, featuring one thousand and eighty four pages of Christmas dreams and desires.
With Toys to clothes, electronics to sporting goods and everything in between, the first sound of "OH! I want that, can i ask Santa for it!" can probably now be heard somewhere in Podunk.
Christmas lists will soon go into first draft phase, as the Canadian staple gets its well worn look over the next little while.
It's four months until Santa checks on the reindeer and revs up the sleigh for another year, four months for us to fine tune that list, all the while making sure that the naughty side of the ledger is significantly lower than the nice one.
With the release of the annual rite of passage in Canada, surely the Christmas decorations can't be too far away.....
Posted by . at 4:10 pm