The commissioner goes crazy over a sharped dress man! 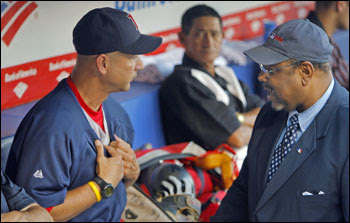 Terry Francona may have been humming the ZZ Top classic Sharp Dressed man after Wednesday night's game with the New York Yankees.
The Major League Baseball Fashion Police staged a raid on the Red Sox dug out during the second inning of the game, anxious to investigate the Red Sox manager's state of dress.
Apparently concerned that Francona was becoming slovenly in the dog days of the season, the Fashion cop launched his investigation. The investigator is an actual New York City Police Department member Eddie Maldonado, who is a lieutenant in the NYPD intelligence department and seemed to show lack of such in the choice of his timing for the investigation.
Francona was trying to place his fielders in position when the near strip search order came down.
The concern over Francona's sartorial deportment apparently stems from the fact that he used to not wear a full uniform shirt under his warm up jacket, he was warned about his style violations and apparently had recently returned to the full dress performance.
However, MLB launched the undercover investigation to see if Francona had anything under his pull over covers. This from a league that has no shortage of problems with possible steroid abuse.
Good to know that they have their priorities all lined up nicely. Down the juice as much as you want as long as you don't get caught, but crimes against fashion just won't be tolerated.
Posted by . at 1:45 am