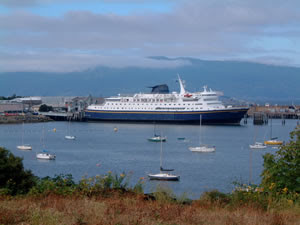 It's not just BC Ferries that is having problems with their vessels this year, the Alaska Marine Highway System has seen one of its most popular vessels sidelined with mechanical problems.

The MV Columbia, which sails between Bellingham and Southeast Alaska, has been pulled from service for the rest of the summer due to the mechanical problems. which means that a rejuggling of the remaining vessels will be required.

The schedules for the rest of the service may be affected as the Ferry service tries to fill the void caused by the Columbia's absence.

Ferry breakdown halves popular sailings between Bellingham and S.E. Alaska
By Kristin Jackson
Seattle Times travel staff
August 17, 2007
The state of Alaska's flagship ferry, the MV Columbia, which sails between Bellingham and Southeast Alaska, is out of service for the rest of the summer season because of a mechanical problem. That leaves only one ship sailing the popular route, with only one round trip a week instead of the normal two.
The Columbia broke down earlier this week and engine repairs will take weeks; the ship already was scheduled for a lengthy overhaul beginning Sept. 23 so it was taken out of service.
Only the MV Malaspina will now sail between Bellingham and ports in Southeast Alaska, including Ketchikan and Juneau. It departs Bellingham each Tuesday. (The Columbia departed on Fridays.)
"There's no substitute boat," said Mike Chambers, a spokesman for the state's Department of Transportation. Travelers who have reservations on the Columbia — which can carry 626 passengers and 134 vehicles — will be accommodated on other ferries if possible or may need to get alternate transportation.
Many ferry schedules within Alaska and to Prince Rupert, B.C., are being rearranged to compensate for the absence of the Columbia; travelers should check with the Alaska Marine Highway System which runs the ferries: www.dot.state.ak.us/amhs/o or phone 800-642-0066.
A piston rod failed and caused the shutdown of the Malaspina's starboard engine; new bearings need to be specially manufactured and that takes weeks.
Kristin Jackson: kjackson@seattletimes.com
Posted by . at 12:07 am