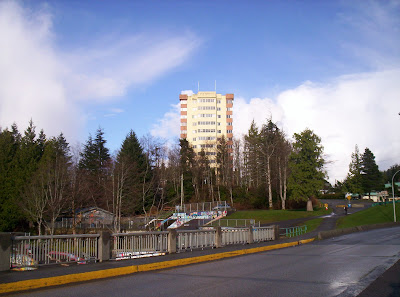 .
.
.
From the McBride Street Bridge at the Civic Centre, the tell tale signs of an attempted arson are on the walls of the Kin Hut today, a structure blackened from smoke and fire.

The story making the rounds of the city on Saturday afternoon; is that Prince Rupert RCMP and Prince Rupert Fire Rescue responded to a call of a fire, apparently deliberately set at the Kin Hut building in the early hours of Saturday morning.

The long time Prince Rupert landmark is located on the banks of Hays Creek, behind the Prince Rupert Skateboard Park and across from the Civic Centre. It had been boarded up over the last few years and has been a frequent target for vandals and would be graffiti artists.

The fire, which if as is suspected was deliberately set, is yet another incident of increasing destructive vandalism in the city, which has seen a number of other incidents take place over the latter stages of the summer months.

However, this latest episode of mindless attempted destruction by trying to set a structure on fire is certainly a step up from the normal routine of graffiti, trashed flower beds broken windows and damaged fountains, cameras and statues.

Prince Rupert RCMP and Prince Rupert Fire will no doubt be investigating the incident, and would most likely appreciate the public’s assistance should they have any knowledge about Saturday morning’s fire.

No estimate of damage has been provided as of yet, nor any indication as to what will be done with the structure.
Posted by . at 3:49 pm