On the Road again, Bill Belsey’s heading out on the road again! 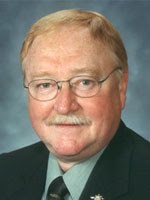 Cue up some Willie Nelson!
The Former MLA for the North Coast is retiring with a southern destination in mind.

Bill Belsey who represented the North Coast riding for one term was elected in 2001 as part of the giant sweep of BC by the provincial Liberal party. Which at the time had capitalized on a province wide backlash against the Glen Clark years of the NDP.

Belsey that year claimed what has in recent years been a traditional NDP riding, surprising many pundits who had thought that the North coast was an impenetrable fortress for the NDP. As the historians will note, the subsequent election would show his election in 2001 was more or less an interruption of the NDP hold on the riding.

His time in the Legislature proved to be a controversial one on the home front, a stagnant economy caused by a declining fishery and a closed pulp mill, brought economic development on the North coast to a virtual standstill. As the region bled jobs and residents left, Belsey was left to carry the Liberal party message to the north coast. It was a scenario that gave many on the north coast cause to think that their MLA was more inclined to represent the Liberal party to the riding, than represent the riding to the government of the day.

It’s a perception that may not have been completely fair, but was probably one of the main marks of his term of office and the hardest negative factor he had to shake. To this day his name still brings up some mixed reactions on the local bulletin board hackingthemainframe and letters to the editor pages.

While he certainly was elected during some rather struggling times there were a few success stories on his watch, the college campus for Northwest Community college was finally completed, a long delayed goal of the local community and one started in motion by the NDP but delayed time and time again. Whether it was happenstance or just fortuitous timing on his part, the college was built and made operational while he was in office.

The groundwork was put in place for the rejuvenation of the Fairview Port as a new west coast container terminal, and while that probably has more to do with the Federal government and the Port Corporation, many suggest that the sell off of BC Rail to CN was instrumental to the CN portion of the funding. Of course Mr. Belsey may not want to tie his accomplishments too closely to that past governmental decision, as there is still considerable suspicion and perhaps even one day litigation over the arrangements of that time made between the Liberals and CN.

A less controversial memory for him may be the fact that the Provincial Liberals eventually did provide some thirty million dollars in financing towards Phase one of the Containerization project at Fairview,

His MLA’s biography lists his arrival on the North Coast as back in 1978, at which time he opened up three businesses on the North Coast. He ran a diving service for a time and from there he went on to a managerial position at the pulp mill.

He was involved in a number of local issues of the day including the North Coast Oil and Gas Task Force which has been long promoting development of the off shore oil and gas industry, so far not to much success.

A former Rotarian and member of the local Shrine Temple he explained to the Daily News that he first got the political bug in 1996, apparently tired of government intervention in the business community. From the relative clubbiness of the Rotarians and Shriners’ he set out on the hard knuckle trail of politics, leading to his election in 2001.

However, as any politician could tell you when you enter politics on any given day more than half the population is going to think you’re doing a lousy job. In particular he found himself at odds frequently with the local labour community as a number of high profile strikes took place across the province and in the riding.

As the issues piled up on the North coast and the inevitable push back against a huge governmental majority took its toll, Belsey became a casualty to the Campbell backlash.

More than half of the North coasts voters in the May 2005 election decided that a change was needed in local representation. Mr. Belsey attracted only 38.5% of the vote in 2005, compared to the 53.7% of the vote that went to Prince Rupert educator Gary Coons who represented the NDP and became the ridings new MLA.

With those results the riding returned to its more left leaning roots and brought to an end the elected days for Bill Belsey.

In recent years he worked as a form of intermediary between the China Paper Group first as the MLA that introduced them to the government and later working for the Group as the moribund Watson Island pulp mill changed hands. He had some duties with the new owners in the early stages of their takeover but had ceased to be involved in the Mill in recent times. And as we are all more than aware, the mill has yet to reopen and its prospects seem further and further away than ever.

His public life on the North coast now seemingly over, He and his wife Lonnie plan on retiring to the south; first to spend some time with their family in Vancouver, then with a Caribbean cruise. After that they plan on finding themselves a fifth wheel trailer and living the life of snow birds heading for the sun wherever it may be.

For the most part though, it would seem that for the foreseeable future, Bill Belsey may be one of the better known Trailer Park boys out there.

The Tuesday Daily News provided a recap of a dinner held in his honour as a way of bidding him farewell from the North coast.

Former North Coast MLA Bill Belsey and his wife Lonie will be riding off in to the sunset this week.
Belsey, a Liberal MLA who served the riding from 2001 to 2005, is retiring and plans to spend some time in the Caribbean as well as traveling North America.
"This would be retirement," said Belsey. "We go to Vancouver for maybe up to six months. I have two boys who have started a business down there and I am going to help them for a bit. Then we are heading down to the Caribbean and we will spend a couple of months there. Then we will hunt for a fifth wheel either in the states or up here and once we have that, then we will be totally be independent."
At a dinner in the couple's honour Saturday night, Judy Fraser of the North Coast Liberal Riding Association, read a letter from Premier Gordon Campbell, thanking Belsey for his work "putting the North Coast on the map."
"Your efforts truly made a difference and I especially want to thank you for your years of public service as an MLA. Now that you and Lonnie are embarking on a new adventure in your lives, embarking along with the cavalcade of RV enthusiasts, it will be a great opportunity to see parts of North America ..." said Campbell.
Belsey, who just turned 61, has been in Prince Rupert for close to 30 years. He ran his own business in commercial diving as well as being a former manager at the pulp mill.
He got involved in politics in 1996 because the decisions coming out of Victoria were making it harder and harder to run a business.
"That's when I decided you either do one of two things in politics, you put up or shut up, and I decided to get involved," said Belsey.
When he won the riding nomination for the North Coast Liberals in 2001, he had the opportunity to sit down with the Premier at a meeting in Prince George to discuss his prospects for winning the riding.
"I asked him 'Given the position that the Liberals have taken of the Nisga'a Treaty (they were not in favour of it, they had a lot of concerns,) and given the fact the NDP have been putting money into a pulp mill... what do you think the chances are?'" said Belsey.
"He (Campbell) just looked at me and said 'Good Luck'"
But Belsey did find luck - he won the election against NDP candidate Colleen Fitzpatrick. But the struggle didn't end there, he said.
Politics is always a challenge, said Belsey.
"There's always a battle out there you've got to fight ... but I could always back to Prince Rupert," he said.
"It was an honour and a privilege to represent this community and others."
He credited the work he did during his time in office to his wife Lonie, for always standing by his side, as well as Judy Fraser, who ran his campaigns and Elaine Sulz, his office manager.
One thing Belsey regrets is that he won't be here for the opening of the Fairview Container Terminal. In his four years in office, two keys pieces of that project fell in place - the B.C. Rail CN lease, as well as the $30-million commitment by the province towards phase one of the terminal's construction.
"When I first got in to government, certainly the elected government knew absolutely nothing about the container port here. I spent a lot of my first year drawing pictures about what we had up here and what we would do up here ... getting the support from the Northern Caucus and the Premier's office until eventually we now have a container port being built," he said.
While he is leaving, Belsey won't become a complete stranger. (As pointed out by his friends Saturday night, both he and Lonie have already left town three times, and somehow they always seem to find their way back to Prince Rupert.)
"We have relatives here and many, many friends we've made over the years so we will be back up from time to time," he said.
Posted by . at 10:16 pm