Push is on for Phase Two of Fairview container port 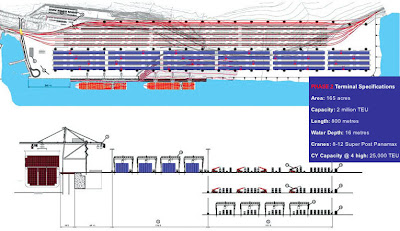 An MP from Prince George says that discussions at the federal cabinet level are leaning towards a quick push to move on to phase two of the Fairview container port project.
Jay Hill who represents Prince George-Peace River says he and members of the federal government cabinet are pushing strongly to continue the momentum and move ahead with phase two.

“Those of us who have had the opportunity to travel to Japan, China, Taiwan, Korea, we know first hand of the demand that is there for that port.”
Hill said that the new container ports phase one is already at capacity and hasn't even seen its first ship call on the port yet, so the need for a phase two is already there and needs to be moved on soon.
The MP made his comments to Opinion 250 which has a story on its website.

Hill Says Push Is On For Pr. Rupert Port Phase Two
Opinion 250
August 20, 2007
Phase one of the Prince Rupert Port is expected to be officially opened September 12th, but the first container ship is not expected to arrive until October.
Prince George–Peace River M.P. Jay Hill says he, along with members of the Federal Cabinet, are pushing strongly to continue the momentum and move ahead with phase two of the port’s development. “Those of us who have had the opportunity to travel to Japan, China, Taiwan, Korea, we know first hand of the demand that is there for that port.”
Hill says the projections are that the existing Port is already at capacity and it hasn’t even seen its first ship. “The demand is just tremendous and that is what’s so exciting about it. We, at all levels of government are going to push hard to just continue right on into the next phase and expand the Port so that it can handle even more cargo.”
The Prince Rupert Port Authority has already started the environmental review process and consultation with First Nations for the expansion of the Port.
The Vice President of Project Development, Lorne Keller says invitations have been extended for meetings with First Nations and the regulatory agencies to scope out the potential environmental and socio-economic impacts of the port expansion.
Posted by . at 10:27 am