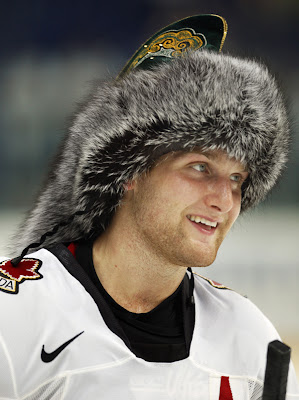 If the famed environmentalist Paul Watson is looking for a new cause, there are apparently a number of furry animals somewhere in the Russian heartland looking for someone to take up their cause.
The Super Series between the Junior teams of Canada and Russia got underway on Monday, and with the completion of game one, a successful one for Team Canada came the obligatory most valuable player of the game awards.
Team Canada's Karl Alzner was the debut recipient of the award for achievement in game one, and as can be seen in the hat modelled above, there will be no doubt several animals in the Russian wilderness feeling a little bit colder these days.
It's a stylish not so little thing that the Russians are handing out to the deserving, a chapeau that surely knocks the ole Daniel Boone coonskin cap or Beaver tail chapeau of the Canadian trappers down by more than a few hat sizes!
The above post first appeared on my HockeyNation blog, for more items about hockey check it out!
Posted by . at 12:55 am