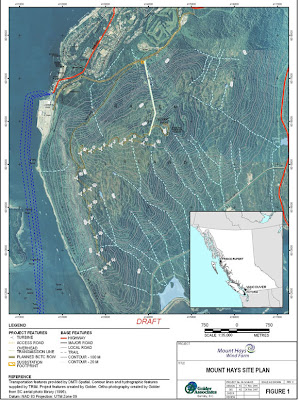 A dispute between the proponents of the Mount Hays Wind Farm and AAER Inc. has seen an order for 17 AAER A-1500 wind turbines for the project cancelled, a move that apparently hasn’t been fully accepted by the turbine supplier.

AAER expects Mount Hays Wind Farm Limited Partnership to comply with its covenants on the deal, due to the fact that AAER has on more than one occasion accepted modified payment terms by Mount Hays. It makes for a situation that could be interpreted by some, as to suggest that the financing aspect of the proposed wind farm may be not falling into place as fast as was hoped.

For his part Jonathon Raymond, the Chief Operating Officer for the Katabatic Power Corp., declined to comment to the Daily News about the dispute except to indicate that company considered the agreement cancelled and was pursuing other options to provide the required turbines for the project.

Katabatic Power says that the project is still going ahead despite the dispute and cancellation of the order. Raymond said that things are still on schedule with a construction phase set to begin in the Spring of 2008 with the wind farm on line by October of next year.

That advisory will be noted with interest locally from those that were looking forward to the development moving ahead and creating local jobs both in the construction phase as well as when the wind farm is finally operational.

The Daily News provided some background on the dispute in its Tuesday edition.

‘WIND FARM UNAFFECTED BY DISPUTE’
Katabatic says project going ahead despite the cancellation of order
By Kris Schumacher
The Daily News
Tuesday, August 21, 2007
Pages one and three

Last month, AAER Inc. announced that they had received a notice from Mount Hays Wind Farm Limited Partnership that they were terminating an agreement to order 17 AAER wind turbines.

“AAER vigorously challenges any claim which affects its right under the turbine supply agreement, and remains convinced that the agreement is in force,” said a statement released by AAER July 26.

“AAER intends to require from Mount Hays that it complies with its covenants, given the fact that AAER has, on more than one occasion, accepted to modify the payment terms by Mount Hays in order to grant more flexibility to Mount Hays.”
Chief Operating Officer for Katabatic Power Corp. Jonathon Raymond of which Mount hays Wind Farm Limited Partnership is a subsidiary, was unable to make a comment on the dispute other than to confirm the agreement was indeed cancelled, and that the company was looking to source the turbines from another manufacturer.

“There’s a couple of manufacturers that make machinery of the same caliber, so we’re going to replace the machines that we were going to use with different machines,” said Raymond.

“They’re better in some ways, but we’ll make an announcement, probably within the next month or two about the direction we’re going with that.”

Despite the negativity surrounding the cancellation and the dispute, Raymond is optimistic about the continued advancement of the project.

“Mostly, what we’re focusing on is we just got our land tenure offer and we’re ready to file our environmental assessment. So, we’re still targeting spring ’08 for the beginning of construction, and having the wind farm up and running by October ’08,” said Raymond.

“So things are still on schedule in that respect. Really what we need to do is set the project up, getting all the construction timelines identified and integrated with the turbine delivery as well, so we’re not sitting around waiting. Obviously in Prince Rupert, you don’t want to be doing construction in January.”

AAER Inc., based out of Bromont, Quebec, said they believe discussions between their senior executives and those of Katabatic will be pursued in order to resolve the dispute. In the event that such discussions fail, AAER believes the dispute would be submitted to the British Columbia International Commercial Arbitration Centre, as is provided in the turbine supply agreement.

AAER representatives were unavailable for further comment.
Posted by . at 7:52 pm