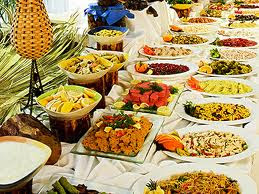 As the long weekend draws to a close, we head to the brunch with politics on our mind. With developments in Canada's Green Party of some interest today, what with the word that former  and recently retired NHL enforcer Georges Laraque has been named the party's deputy leader.

Laraque most recently of the Habs, will provide for  a hopeful introduction into Quebec for the Greens where Laraque has achieved a bit of a reputation beyond his on nice exploits, for his environmentally sensitive ways.  He replaces Jacques Rivard, who apparently found that the political field of the Bloc Quebecois was greener for him.  Should one day the Greens (unlikely as it may seem) form a government, we imagine that if nothing else Laraque most likely would make a good minister of defence.  Here we see him discussing the merits of cutting greenhouse gas emissions with Donald Brashear...


.
On a fight of a different kind, the word is out that the Anti HST forces may be facing a cash crunch shortly, with but 8,000 dollars remaining in their budget to fight the Liberals HST program. That's a rather large cash flow change from the 118,000 that was in the political kitty at the start of the anti HST program. The low number however doesn't seem to be causing any undue alarm at the gathering of the HST opposition. Bill Tieleman one of the driving forces behind the movement, feels that should they need more cash a simple call to arms (or wallets in this case) would be quickly answered by those that are still angered by the introduction of the tax.

Putting some of that tax money to work could find its way into the Defence department, which his currently putting out the need for more modern fighter aircraft to provide for a chaining dynamic in the nations security. The fighter of preference is the 140 million dollar a plane, fleet of next-generation F-35s, a collection of 65 planes which will come with a $9-billion price tag, not to mention an estimated $16-billion when a maintenance contract is completed. Critics of the procurement plan suggest that with no threat from the days of the Soviet Union on the horizon, it may be too extravagant an expense to take on in tight economic times. As though to offer up some support for the purchase, the Russian air force offered up a reminder of why such planes may actually have a use on the Canadian air frontier. Two Russian bombers make a fly by of sorts near Goose Bay, Labrador, sending CF 18 jets scrambling out of Bagotville Quebec to offer a helpful redirection away from Canadian airspace.

Trash talking in the ring moves to the Internet as two junior welterweights take to sparring on Twitter rather than in the ring. The trash talking between Amir Khan and Timothy Bradley has developed almost a cult like status, as fans eagerly await the latest tweet. It's providing a preamble to what may be a rumble in the ring, perhaps the winner could earn the much desired Title of the Tweet, symbolic of the being able to back up the trash talk with a good left right combination.

Jon Stewart debuted a new look this week with his return to the Daily Show desk with a most prominent collection of facial hair, a grooming change that has many fans talking about what may be behind the new look. With the sudden interest in whether Mr. Stewart's whiskers are helping of hindering his program content, we look back at some other famous facial alternations courtesy of Cracked.com.


The tribulations for BP continued this week with a suggestion that some of their branded retail outlets were about to giving serious thought to scrapping the corporate name on their stations, such is the anger being directed towards the energy giant in the wake of the Gulf Oil crisis.  And as though studying from the same set of blue prints, Enbridge now finds itself in the midst of a backlash, after a pipeline problem in Michigan popped up as the company was trying to sell the merits of its Kitimat pipeline project. And if that optic isn't bad enough, now the Tyee has created a top twelve list, outlining some of Enbridge's other pipeline problems of the past.

Conrad Black returns to the keyboard, with another edition of his review of his final day of incarceration in a Florida prison, Black provides some background on the process of his delivery from the justice system. A handy reference piece as to his interpretation of the system of Justice in the USA and his place within the punishment phase of American justice.

Our long weekend almost complete, we help to celebrate BC Day with a look at our podcast selection of the week, from the CBC, the BC Alamanc podcast. It offers up a second listen to the storied and people of the province taken from the radio show hosted by one time Prince Rupert resident Mark Forsythe.

And with our summer vacation period at the unofficial halfway point, we turn to one of the ever popular sounds of the summer, the Beach Boys. Mike Love outlines for the National Post, what he believes has made the Beach Boys survive through summer after summer, a longevity that seeks out our quest for cars, sun, surf and fun.

To wrap up another week of the brunch, we're heading out to catch a wave...