BC Ferry has hard landing in Gulf islands 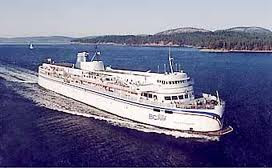 A BC Ferry, the Queen of Nanaimo has had a rather rough docking on a small island in the gulf island chain.

The ferry had what is described as a "hard landing" this morning as it arrived at the dock at Village Bay on Mayne Island, one passenger was injured in the incident and the ferry suffered some damage during the course of its arrival.

Because of the incident, the ferry has been taken out of service until the cause of the trouble has been identified and all damage inspected. The injured passenger was airlifted to a hospital in Victoria, there has been no report on the damage to the dock on Mayne Island, the only berthing position on that island for the ferry.

An investigation is now underway into the incident, with particular attention to be provided to the data recorders onboard the vessel.