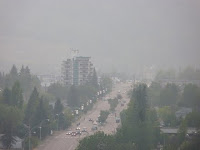 There was lots of smoke in the air, but no blazes to report for residents of Prince George on Thursday night.

The Prince George on line news portal Opinion 250 has provided some interesting pictures of Northern BC's largest community wrapped in a blanket of smoke last night.

At times during the evening Prince George residents thought that perhaps forests within the vicinity of the city had caught fire, however that is not the case.

The drifting smoke which arrived over that city around the dinner time, had blown northward from the number of fires currently burning through the Cariboo Forest region, where wildfires have forced evacuations of isolated communities and closed a number of forest service roads while crews battle the flames.

The smoke has also raised concern for those with underlying health concerns, those with conditions that are considered high risk have been advised to take a number of precautions during this period.

Labels: Forest Fires in BC August 2010