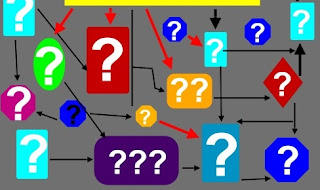 A bit of explaining was required at council on Monday night to try and clear up some of the muddy water of Watson Island financials, as Councillor Sheila Gordon-Payne sought to get a better understanding of how the city was financing the maintenance and assorted costs of the city's returned ownership of the Watson Island site.

The City's Financial Officer Dan Rodin, outlined the accepted accounting practices in place at the moment that reconciles the operations of maintenance requirements on the site with the city's current financial picture, though after reading both the Daily News and the Northern View's recorded accounts of Mr. Rodin's deliberations, we must admit that the  much like our days in high school math classs, this new math still causes much in the way of trouble when it comes to understanding how we're paying the bills and when we may recover those costs.

While the language of the accountants no doubt has built in safety measures, as Mrs. Gordon Payne points out in her comments to council, some folks may not feel to comfortable with the idea of spending today, the potential and hopeful revenues of tomorrow.  The continuing process of spending real dollars in the anticipation that future dollars may replace it seems rightfully to be an ongoing item of concern.

The twin reports from the city's media sources can be found below, translation fees perhaps can be contributed to the city's Watson Island budget fund.

At the May 10 Prince Rupert council meeting Chief Financial Officer Dan Rodin, responding to inquiries from council, clarified where the money to pay for maintenance at Watson Island is coming from and confirmed that it is coming from a surplus that results from generally accepted accounting practices but is not actually in the bank.

“For budgeting purposes we did not include or included very little revenue from the Watson Island site. However we are under generally accepted accounting principles so we did have to accrue nine twelfths of a year’s revenue and we included that as a receivable at this point in time,” he told council, also confirming that other accounts are being depleted to cover costs.

“The money that we are spending on Watson Island is out of our surplus...Yes it is that surplus and yes we are spending it and it is the surplus we haven’t collected yet from the Sun Wave group.”

But the idea of spending money that hasn’t been received by the City was not one that councillor Sheila Gordon-Payne said she was comfortable with.

“This is the part that has filled me and continues to fill me with some fear, and I know that the rest of council doesn’t necessarily agree with me and that at this time we own some land which should secure us some money, but the fact is we continue to budget as if we’re receiving the taxes although we’re spending real dollars out of our account to support that site. I won’t be convinced we will receive that money until it is in the bank this time,” she said.

“The costs we have at Watson Island are actually hard money and money going out of our bank accounts. If we continue to have to put out the hard costs without receiving any of the money we know should come in, might come in, how long before we’ll be back to having to take a loan out to get through the City’s year?”

In response to that question Mayor Jack Mussallem stated that the City would “long in advance of that look for other opportunities in regards to that property and the divestiture of it”.

Councillor Anna Ashley, noting that her understanding was that the money for site maintenance was coming from a reserve, asked Rodin to clarify exactly where it was coming from. “When you say it’s a reserve, my tendency is to say no it’s a surplus or it’s deferred revenue or something else because what reserve funds can be used for is specified either by the Community Charter or a bylaw of council. This money is a reserve of a small 'r', and in accounting terminology is a surplus,” explained Rodin.

“If it was a big 'R' reserve it would be a statutory reserve and that may be where the confusion arises.”

This year the City has budgeted $1 million for Watson Island from an "appropriated surplus".

Watson Island on the books
By Monica Lamb-Yorski
Staff Writer
The Daily News
Thursday, May 13, 2010

Confusion around where the money is coming from to pay for the upkeep at Watson Island continues.

At Monday evening’s council meeting, when reviewing the City’s Audited Financial Statements for 2009, questions arose about the use of surplus funds and whether that’s actual money the City has in the bank.

Under the Schedule of Tax Revenues for the Year Ending December 31, in the item line for Major Industry, it shows an actual of $4,171,025.

“For budgeting purposes, you remember that we did not include any revenue or very little revenue for the Watson Island site.

“However, we are under generally accepted accounting principles and so we did have to accrue nine twelfths of the year’s revenue. Of course, we’ve included that as a receivable at this point in time,” Rodin said. Councillor Gordon-Payne responded that those accounting principles continue to fill her with fear.

“I know that the rest of council doesn’t necessarily agree with me, and I know at this point in time we own some amount of land, which should secure us some amount of money, but the fact is we continue to budget as if we are receiving the taxes, although we are spending real dollars out of our accounts to support that site and I won’t be convinced that we are going to actually receive all of that money until it’s in the bank this time.”

“Our community has certainly been through this before where the council of the day continued to budget for the City and put the taxes as if they were in the coffers and then was stuck holding the bag for quite some time for quite a bit of money,” Gordon-Payne said, adding that the community is even more vulnerable at this time than it was in the past.

Although it’s generally accepted accounting principles, she commented, “I wish there was a way we could present this with more clarity so that our community could actually see what we are doing so that we might even have to look even harder at tightening our belt so that we are not spending money that is not within our budget.”

Gordon-Payne also asked how long it would be before the City might be back where it had been five years ago and have to take a loan out to get through the entire year.

“How long we could continue to pay cash and meet our obligations would depend on what occurs along the line. If we were going to have cash flow problems, we would probably scale back on any type of expenditures which were optional, such as public works,” he added.

“We monitor it,” Rodin commented. “At this point, I’m fairly confident, we are good for quite some time.”

With regards to the monthly costs at Watson Island, Mayor Jack Mussallem told council that before it got to a point where the City was running into financial difficulties, the council would long in advance look for further opportunities for the property and the divestiture of it.
Posted by . at 2:10 pm