The saga of the Pacificats, forever viral... 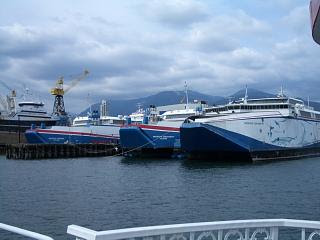 They were perhaps one of the most controversial projects in British Columbia history, in the end contributing to the downfall of Glen Clark's NDP government of the day and to this day for some they remain the powerpoint poster child for a boondoogle, eventually morphing into what became the Fast Fleet scandal.

Orphaned off by the incoming Gordon Campbell's Liberals the Pacificats sat idled in North Vancouver for years, never talked about except for political points by the Liberals and never really becoming a fixture in the BC Ferries fleet, sold to the Western Marine Group, they again were eventually sold off by private interests to Abu Dhabi for an undisclosed price.

As the Liberals divested themselves of day to day responsibility for ferry service in BC through it's quasi privatization of the Ferry Service, the new regime went on a European buying spree to replace the aging fleet, the new ships occasionally passing by the mothballed Cats during trials in Vancouver harbour.

We'll never really know if the Pacificats were what we were looking for in marine transportation, or if they would turn around BC's dying shipbuilding industry. As the controversy raged on they were taken out of the BC Ferries fleet inventory almost as soon as they slipped off the blocks at Pier 94 in North Vancouver, yet much like the  days of the Avro Arrow we have our memories and conspiracy theories. And as that famed airplane provided for its debate, so too have the Pacificats.

The Knowledge Network recently ran a documentary on the building of the Pacificat fleet and as is the case in any video these days, it has been archived for posterity on the YouTube portal.

Below are all six parts of the project, an look back at the heady days of Captain Clark's expeditionary fleet, the program ends on a rather positive note, on which as time would show wasn't something that would remain for long.