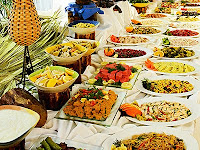 The Sunday Brunch wishes all the Mom's a fine and enjoyable day, and to begin our Brunch we'll head for the juke box, and some advice for Mama's from Waylon Jennings.
.
And perhaps the list of advice should include sports fan, it was a rough week for those who follow sports with perhaps a little too much passion and a little to much vocal support. In two separate incidents police resorted to the use of the taser to quell an unruyl fan. The First of the quick draws took place in Philadelphia where police tasered a Phillies fan (well we imagine he is/maybe was by now a Phillies fan) who decided to go for a job around the field.


The second taser event took place at the Players Golf Championship, where what was described as a drunk and loud fan disrupted play at the 11th hole, if these things come in threes, we imagine that hockey fans might be feeling just a little bit nervous.

While Louisiana continues to keep a wary eye on its coastline, a name from the past came back to haunt them as yet another disaster arrives on their shores. Micheal Brown, Brownie to his friends and a certain former President surfaced to share his wisdom on oil slicks with an anxious population. Brownie, who seemed to spend the key moments spinning his tires after Katrina passed is doing a little finger pointing of his own on the Oil rig file, much to the worry of Louisiana's residents who no doubt remember his help from last time.

Hey Moms, if your youngster wants to waste away the time on the video game machine don't put up too much of a push to other things, if all goes well one day he or she too could be wining some big money from a social hobby. The poster boy for the gaming generation has got to be Wade McGilberry, who won one million dollars playing Major League Baseball 2K10 and throwing a perfect game in a tournament designed to launch 2KSports Major League Baseball, McGilberry used the arm of Kenshin Kawakami to victory to collect his 1 million.

They were busy beavers around that dam, photos from NASA and Google technology showacse as the handiwork of a colony in Northern Alberta proves to be quite impressive especially when viewed from high above..


The  65th Anniversary of Canada's Liberation of Holland has proven to be a rather emotional journey for both residents and returning Canadian soldiers and their famlies upon their arrival for the commemoration, to this day the Dutch people continue to learn about the sacrifices and efforts of Canada to secure their freedom from Nazi Germany of the day.

And while the latest in technology;s craze is lost for Mother's Day, perhaps a raincheck will be the gift of the day today as Apple announces that Canadians will be able to buy the iPad from Canadian sources as of May 28th. The hugely popular device has been having record sales ever since it first came on the market a few weeks ago and shortly Canadians won't have to go to rather unusual lengths to secure one for themselves.

Little Stevens Underground Garage celebrates Mother's big day, with an eclectic selection of songs and information for you to share with your Mom.

And to put a wrap on the Brunch for this Sunday, an interesting interpretation of Paul Simon's ode to Motherhood, as Ziggy Marley provides the motherly vibe for the day... our way of saying Happy Mothers Day...