Glad tidings to you, now send us some cash! 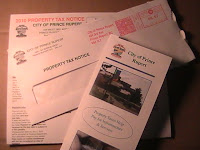 What's left of Prince Rupert's taxpayer base received the salutations of the city this week, with property tax assessments arriving in mailboxes from Seal Cove to Fairview and all points in between, yet another increase is in store for the majority of Rupert's dedicated home owners, as the city continues to struggle with the financial ravages of a municipality with less and less industrial infrastructure to count on.

Included in the mailing this year, the annual message from the Mayor which outlined a few of the items on the municipal checklist that the city is currently working hard on for us.

Included in the Mayor's meditations were a recap on what the Budget is all about:

The 2010 budget represents a balance to meet the needs of the municipality, to provide services and functions required at an adequate level of service. Included are recreation, sewer, water, roads, street lights, cemetery, fire rescue, police and parks to name a few. Some others are the Lester Centre, Prince Rupert Library, Museum of Northern British Columbia and Pilsbury House.

The Mayor looked forward into time with thoughts on the global economy and what may come to the Port of Prince Rupert in time:

There is evidence of the world's economic prospects improving as work at all port cargo facilities increases. Also, the environmental assessment work for the second phase of the Fairview Container Port and the proposed potash export facility are continuing:

Other potential economic development projects caught his eye for his mailer this year:

Whole  log processing at three different businesses in the Industrial Park and container stuffing activity at Watson Island are increasing. Other developments include a scallop hatchery, a new marine fueling facility and refurbishment of the old CN Rail Station to facilitate restaurant, retail and office opportunities.

And everyone's favourite tar pit the Watson island site also made it to the newsletter to taxpayers, though there wasn't much mention of the current state of litigation between the city and the site's previous owner:

Prince Rupert City Council continues to work on the divestiture of Watson Island to create job opportunities and put that property back on the tax roll.

As for the financials, the tax bill insert provide some background on how much money the city is budgeting for and expects to receive and spend, to a total of 37.6 million dollars for 2010.

There is a listing (but not much explanation) of Expenditures with Public Works  and Capital spending leading the way with $11,818,000 in anticipated spending on the books, utilities grabbed the number two spot in spending at $9,253,000 while Protective Services is the third most costly item on the books at $6,773,000, Parks and Recreation was fourth with $5,126,000 in expenditures listed.

As well, for our examination a compilation of some $8,889,000 in Capital Spending is listed, some new, some carried over from 2009 and some that may cause Rupertites to raise an eye once or twice.

Other information on the 2010 Property tax rates can be found at the city's website.

The Deadline  and date for your annual contribution to the city's financial planning is July 2, 2010, those late to the taxpaying party will be charged a ten percent interest penalty on unpaid taxes after that date!
Posted by . at 12:52 am