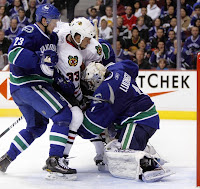 “I have a stone in my shoe. You can remove it”
Don Altobello to Mosca in the Godfather.

Alain Vigneault may be channelling the Don these days, thinking much the same thing behind that Vancouver bench whenver he sees the visage of Dustin Byfuglien on the big screen, or in front of his goaltender.

Wednesday night, it was Byfuglien once again who caused much of the way of angst in the camp of the Canucks, his Game three performance distracting the Canucks from their game and more importantly added to the Black Hawk goal count when it mattered most.

The giant 6 foot 4, 257 or so winger was a concern for the Canucks in last year's playoff run and though off to a slow start in this years festivities, Wednesday night was like Groundhog Day for Roberto Luongo and the hard pressed Vancouver defence, the immovable object in Byfuglien took root outside the crease (and occasionally within it) limiting Luongo's visual range while Byfuglien stood ready to bang in the rebounds as he did with quick succession as he tallied up a hat trick and quickly became public enemy number one for the suddenly furrowed brow set of the Cancuk fan base.

And much while the Canuck's coach might wish that the Byfuglien factor wasn't such a media obsession, after Wednesday night's performance it's safe to say that the marquee name for this series won't be the oft celebrated Jonathan Toews,  Patrick Sharp or  Marian Hossa, but the guy now proudly wearing the Black Hawks black hat.

While the Canucks may wish to see Byfuglien out of the crease area and pushed to the boards, the real place he's seemingly having an effect is in their minds, he attracts their attention and seems to be able to spur them on to bad decisions whether it's an untimely penalty or a mis-directed pass to try and avoid him, regardless by his presence he's been able to knock them off their game.

The last two games have brought the Canucks quickly back down to the ice after their astounding jump out of the gate in game one, but with Wednesday's domination the balance of momentum may be slowly drifting the way of the Hawks, something that will have to be stopped on Friday, going back to Chicago down 3 games to 1 would not be a move that builds confidence.

The first thing they will have to do on Friday is find a way to focus more on the game and less on the work of Byfuglien, find ways to bury their own opportunities and reduce the time of play in their own end allowing the Hawk torment them so.

Otherwise the only way that Alain Vignault may be able to beat the fellow is to ask management to pick him up whenever he gets a chance at free agency.

The item above first appeared on the HockeyNation blog
Posted by . at 11:24 pm