Demands for action from the city on the state of the city's downtown image! 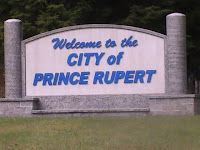 "We have a City Administrator and a Toursim man and all these people are supposed to be working and I don't know what they are doing," -- Civic Pride proponent Charlotte Rowse expressing the frustrations and asking the questions of many in Prince Rupert over the state of city's decrepit downtown look.

The decline of the city's downtown area, which looks worse with each passing week has become a key point of concern for local residents, with Charlotte Rowse the feisty, 86 year old dynamo leading the charge for accountability from  City council, the civic administration and its various departments.

In an interview with CFTK TV 7 News, Mrs. Rowse provides perhaps what is the most impressive denunciation of the lack of action by council on the issue. In her short appearance on the news, she provides the most concise criticism of the city and its lack of effort than anyone else has since this council and the one before it took office.

For a city that seemingly wants to project itself as a tourism destination, the ugly nature of the boarded up shops, neglected storefronts and general dirtiness of the city's main shopping district is something that will no doubt leave visitors to the city with much to discuss when they return home, we suspect that most of those comments won't be particularly positive or helpful for return visits .

The gradual and ongoing neglect of the city's downtown area is something that of course requires an answer, but as CFTK TV found out as part of their report, feedback from city hall seems to be harder and harder to find these days.

CFTK reporter Sahar Nasimdoost asked the City for comment on Mrs. Rowse's thoughts, and by the time the report went to air it appears that no reply had been provided.

If nothing else perhaps an answer to Mrs. Rowse's main question is something they could provide, exactly what is it that the city is doing to improve the eyesores of what is becoming a simmering civic issue?

If by chance our civic officials haven't heard her questions yet, here's a link to CFTK's report, where Mrs. Rowse provides the talking points for those inclined to listen, the ball as they say is now in the hands of city council, perhaps the courtesy of reply to Mrs. Rowse (and the rest of us as well) could be provided!
Posted by . at 9:04 am