Seeking some illumination on the topic of Pacific Lighthouses

The issue of lighthouse de-staffing will receive another review in the next week, as a Senate Committee into the proposal will arrive on the West coast to conduct community sessions up and down the coast.

Back in 2009, The Department of Fisheries and Oceans announced its intentions to de-staff lighthouses in both British Columbia and Newfoundland, a proposition that was widely panned by representatives and residents of those areas that were to be affected.

On the north coast, Prince Rupert City council weighed in on the issue, as did both MLA Gary Coons and MP Nathan Cullen who have since taken up the torch to keep the lighthouse stations fully staffed at their current levels. 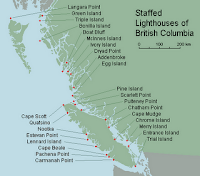 All of those on the north coast who opposed the plan received a partial victory back in October of 2009, when Fisheries Minister Gail Shea put the automation plan on hold,  pending further review.

One part of that review is now underway with a committee consisting of five members touring those areas that will be most affected by any de-staffing decisions.

The travelling Senators recently completed their tour of Newfoundland to learn more from east coast residents on the issue, now the time has arrived for the Pacific coast to have its say.

As part of their process of review on the west coast, the Senate Lighthouse study participants will hear from local residents into the impact that any proposed change to the current lighthouse staffing levels may have on maritime safety.

The committee is meeting with residents in Victoria, Nanaimo, Campbell River, Vancouver and Prince Rupert, with the Prince Rupert sessions set to take place on Friday and Saturday, November 20 and 21.

Friday will be a travel day for the Senators as they head off to such light house stations as Bonilla Island, Triple Island and Green Island for tours and discussions.

Saturday the public will have the chance to have their say, with a public session starting at 9 am at the Jim Ciccone Civic Centre.  The time frame of discussion however may be short as Senate participants are to be in Vancouver for public meetings starting at 5 pm.

The progress of the Committee as the travel the country can be examined from their website on the issue, which offers up such items as reports, witness lists and other information pertaining to the proceedings.

The proposals to do away with staffing on the North coast have been a particularly controversial one at times providing for much emotion from those that have the most at stake in any decision.

Some of that emotion  we imagine the Senators will learn first hand on Saturday, when they open the doors and begin the discussion at the Jim Ciccone Civic Centre.

Some of the discussion on the issue from other communities of the west coast can be found below.

Well, with the wind storms the North has experienced these past months, lets hope they consider the dangers of not having staff. It's bad enough the wind does damage with staff in place, what happens if there are no staff. This could put people and ships in danger. The damage this past month should be a sign.