A bite from the hand that feeds the corporate beast 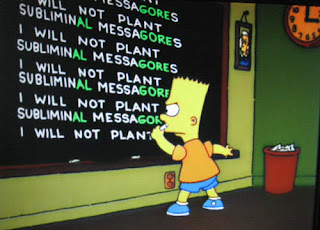 Bart Simpson is clearly in charge of production these days over at the Simpson's studios and some of the folks in the News department at Fox aren't very happy about it!

The long running television show has been having much fun with their corporate masters these past few weeks, as the opening credits of the show feature some digs at the expense of the Fox News Channel.

The ribald rivalry started off a few weeks back when the opening to The Simpson's featured a Fox News  chopper with the slogan "Not Racist, but Number one with racists".

A playful re-interpretation of the channel's positioning statements that earned the show a special place on Fox News's O'Reilly report, earning the producers of the show the less than coveted Pinhead salutation from O'Reilly himself.
.

.
That broadside provided a second barb directed at the News Channel on this weeks edition of the Sunday night cartoon, another news copter flying the latest message from the Simpson's studios to their stablemates over at the News Channel.

This one featuring the slogan of "Unsuitable for viewers Under 75", a snippet of television that was only provided for the North American audience, such was the rushed nature of the Simpson's counter offensive.

The full review of the All in the Fox Family Feud can be found from the Mediaite site, which provides much background on the bickering kids of Fox.
Posted by . at 9:48 am

WHAT IS YOUR OBSESSION WITH FOX.IT'S A CONSTANT DRIP. DO YOU BELIEVE FOX IS RACISTS ? OR ARE YOU MORE COMFORTABLE JUST HINTIMATING. ARE YOU A JOURNALIST OR A COMMENTATOR. JUST ASKING

Uh, it was a funny story( (as I'm sure the producers of the Simpson's intended), though perhaps lost on some in the audience.

However, since you mention it Fox offers up more than a few items for commentary, so to answer your question I guess this makes the blog a commentary piece in this case.

The purpose of the blog is to spur on conversation, which it would seem it has been successful in this instance.