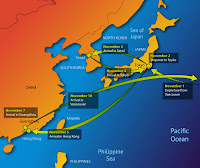 Don Krusel, the President and CEO of the Port of Prince Rupert continues on with a tour of Asia with his counterparts from government and transportation, and so far the discussions have provided for reinforcement of the Pacific Gateway strategy for Canada's west coast ports.

In a press release issued by the provincial government on Sunday, Mr. Krusel's observations were featured as he outlined some of the feedback thus far, as the Canadian delegation meets with industry and government officials in China, Japan and Korea.  Highlighting how the discussions may benefit communities along the northern corridor of the Pacific Gateway.

Among the many topics that have been examined during the tour, the increasing thirst for Canadian coal by Asian interests has topped the agenda, with the prospect of increased shipments of northeast British Columbia coal and resources from Alberta through Prince Rupert's Ridley Terminals a distinct possibility in the wake of those discussions.

The Port CEO is travelling with Transportation and Infrastructure Minister Shirley Bond and a host of other BC officials, seeking to develop new and expanded trade opportunities for the Ports of Prince Rupert and Metro Vancouver.

During the course of his time on the tour he's found some interesting observations from Asian interests over the level of impact that the Port of Prince Rupert has had on the transportation networks.  Mr. Krusel provided a look at some of the reaction to Prince Rupert's place in the transportation system since the Fairview container terminal joined the Ports infrastructure resources, along with Ridley Island's terminals.

One of those that stood out for the CEO was recounted for the BC News service of Black Press, as Mr. Krusel reviewed the thoughts of one major customer from Asia, who wondered how a little fishing village on B.C.'s north coast could connect with major North American markets such as Chicago.

The Port's CEO reviewed how the success of the Port's numbers thus far have continued to attract attention from Asian industries, seeking transportation corridors for their requirements.

The tour of Asia comes to an end on Wednesday, when the Minister and her group return to British Columbia, a review of some of their activities over the last ten days can be found from the Gateway's website.
Posted by . at 9:32 am

eToro is the ultimate forex trading platform for newbie and advanced traders.