A Day for Remembrance 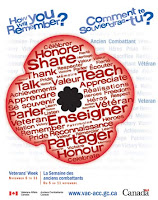 The 11th hour, of the 11th day, of the 11th month, perhaps one of the most solemn moments across the land, as the nation stops to remember those that gave the greatest of sacrifices through the decades and takes time to think of those that still step into danger on our behalf today.

As always as the 11th hour is marked, the Prince Rupert Remembrance commemoration will take place on the city's court house lawn.

A day which starts with the parade of colours and march past to the court house steps, the traditional playing of taps, the benedictions and the moments of silence to pay our respect for those that have been taken from us.

Canada's Veteran Affairs has once again this year provided a wealth of resources for those to learn more about this nations veterans and those sons and daughters that have died while on guard for this nation.

Among the most emotional of their offerings are the books of remembrance, an on line reproduction of the books of honour of Canada's war dead.

These books are kept in the Peace Tower at Parliament Hill in Ottawa, passed by with reverence by thousands on a daily basis, you can learn more information on the collection and read over the scrolls themselves from this link.

This years as in many of the past, Veteran's Affairs has commissioned a video presentation to reflect the theme of remembrance, this years contribution can be seen below.
.

.
.
.
One of the most widely known accounts of remembrance every year is the recitation of In Flanders Fields, John McCrae's ode to brotherhood and loss on the battlefield, a poem that has captured the essence of Remembrance Day for generations of Canadians.

A small vignette of his life from 2007 provides a fascinating glimpse into his service and the genesis of his now legendary poem.
.

.
.
His words remain today as a powerful reminder for this nation to never forget the cost of duty and to forever honour the sacrifice so many families have made over the decades and continue to make to this day.


In Flanders fields the poppies blow
Between the crosses, row on row,
That mark our place: and in the sky
The larks still bravely singing fly
Scarce heard amid the guns below.


We are the dead:
Short days ago, We lived, felt dawn, saw sunset glow,
Loved and were loved: and now we lie
In Flanders fields!


Take up our quarrel with the foe
To you, from failing hands, we throw
The torch: be yours to hold it high
If ye break faith with us who die,
We shall not sleep, though poppies grow
In Flanders fields