A light dusting of winter 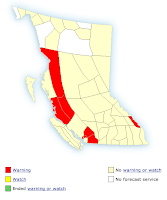 Tuesday morning brought the first snow of the season, a small dusting that covered roads but resulted in little trouble on city streets.

City crews had most major routes sanded by the morning drive to work or school and with accumulations of only about 5 cm expected through the day, there isn't any anticipation of driving concerns for those that take their time and have properly prepared vehicles for the conditions.

The forecast for the next few days provides for much of the same, some occasional flurries giving way to rain showers as warmer temperatures arrive on the north coast.

The flurries will continue into the evening with a low of 0, Wednesday may feature an additional 5 cm of snow wit the winds picking up by afternoon and a high of 3, Thursday will feature rain with a high of 6 before cooler temperatures while more snow flurries and/or rain are forecast for the weekend.

In addition to the slight dusting of snow, portions of the North coast Inland area are in the grip of an Arctic outflow warning with wind chill values bringing the temperatures down to -20 degrees

Tuesday's snow has made for slippery conditions on Highway 16 to the east, with compact snow reported from Houston eastbound towards Prince George.

A full report on road conditions in the Northwest can be found at the Drive BC website.


While weather conditions have been much stormier and colder to the south, no weather related concerns were relayed from either Air Canada or BC Ferries for Tuesday