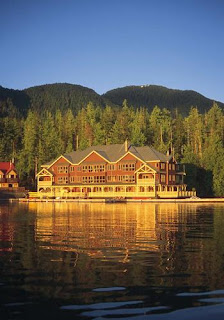 The King Pacific Lodge, tucked along the central coast within the confines of the Great Bear Rainforest has once again wowed the world, this time collecting an award as North America's Leading Green Hotel of 2010, declared so at the World Travel Awards in London, England.

King Pacific was one of three British Columbia green hotels nominated for the award, with Brentwood Bay Lodge and Spa and Raven Havens also making the short list, however when it came time to hand out the honours, it was King Pacific that took to the stage in acceptance.

The lodge which is towed from its winter harbour in Prince Rupert to Brentwood Bay in time for the June to September season has long been considered one of the top resorts to pull up a deck chair at.

This year Conde Nast Traveller magazine awarded the Lodge it's 2010 Readers Choice awards, as the magazine's readers selected in the top resort in Canada for the third consecutive year, just another award to pop up on the Lodge mantle.

The latest award comes from the owners commitment to sustainable practices, respect for culture and commitment to green beliefs, all of which are clearly meeting the standards of excellence that the Lodge's 750 visitors a years have come to expect.

A maximum of 34 guests at a time arrive for their stay in the pristine wilderness of Brentwood Bay, a three night all inclusive escape from the real world that will cost them $4,750 per person.

The attention to detail at the Lodge and it's commitment to environmental respect is clearly paying off for the owners, management and staff at King Pacific, a standard that suggests that they best keep some room on the mantle for a few more awards in the years to come.

The full review of their success at the World Travel Awards can be found from the Vancouver Sun.

First of all I want to give you big Congrats for getting World Travel Awards in London, England. I know King Pacific Lodge is one of the best hotel than the Brentwood Bay Lodge and Spa and Raven. A big congratulation for the whole King Pacific Lodge team.
Thanks for sharing it.