Really Admiral, it's hard to parallel park while at sea! 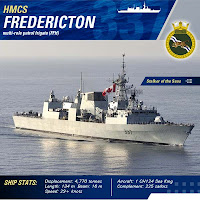 A Canadian warship and an American replenishment vessel had a short lived game of bumper cars at seas, as the two warships collided at sea during joint Canada/US naval exercises yesterday, bumping hulls during the process of the Canadian vessel preparing to take on fuel while underway at sea.

The incident reported today was described as featuring superficial scrapes and bumps to both vessels, HMCS Fredericton and the USS Kanawha, with both returning to port on Friday, the Fredericton to Florida, the Kanawha to  Virginia to bang out the dents.

No injuries were reported from the incident, which while uncommon, does happen on occasion. No official details as to the state of the weather at the time of the incident was reported,  though a more complete investigation is expected to take place into the event.

While the US Navy isn't pointing fingers, details in an American based newspaper suggest that it was the Canadian ship that collided with the American vessel while lining up for a replenishment.

The Canadian vessel along with other ships from the Navy's Halifax base, are taking part in month long exercises with the American navy along the east coast through the month of November.