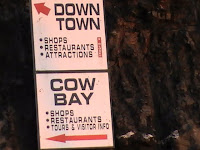 All but chased away from their first choice of the Sea Sport building in Cow bay, School District 52 has announced the much anticipated location for the new high school, set to open its doors in only a few weeks.

The Pacific Coast School, which faced no shortage of controversy from a number of merchants and businesses in the Cow Bay district, has found a more favourable reception on Second Avenue West as they prepare to set up shop in the old Hecate Strait Building beside Tim Horton’s in the six hundred block of Second West.

Careful not to have a repeat of the pitchfork and torch routine from their would be new neighbours, the staff of the new school took time to approach all of the merchants in that part of the downtown to make sure that there would be no misunderstandings or hard feelings over their location and intentions as a neighbour.

School District Superintendent Eric Mercer said that the various businesses expressed no reticence in welcoming them to the area and most importantly there will be no zoning issues to deal with as the building was already zoned for educational type pursuits when it was used by Hecate Strait.

And that probably is a good thing, after more or less blindsiding the School district in December with the Cow Bay zoning refusal, the city apparently couldn’t fit them onto the agenda in time for last Monday’s council meeting.

A rather curious treatment of the School District, considering the mess that the first attempt at setting up a school provided for in council chambers. One would think that council would have welcomed the opportunity to put the controversy of the past behind it, by making the time to trumpet the good news nature of the new location.

But instead it seems that they once again gave the new school short shrift, hoping to fit it into the schedule in the weeks to come perhaps during a special session of council.

In the interim period while the School district sought out a new location, they didn't seem to gain much in the way of public support from council, with their silence seeming to leave the School District to twist in the wind over the whole situation.
.
Perhaps quietly behind the scenes city staff and council were busy helping the School District to smooth the transition to the new site, but one kind of gets the impression over the last few weeks that the Pacific Coast School officials have been carrying that ball on their own.
.
With the relocation troubles now out of the way, the Pacific Coast School can finally get back to the work they've planning to get underway, that of education, which despite all of the distractions of late is probably the most important part of all of the drama over these last few months.
.
When it comes time to cut that ribbon to officially open the new location, we suspect that perhaps the welcoming new neighbours might get a prominent seat for the official opening, while the politicians won’t find quite as high a spot on the invite list.

There were smiles on the faces of teachers Miguel Borges and Doug Brown at this week's school board meeting as Superintendent Eric Mercer announced the new location of the Pacific Coast School.

After the City of Prince Rupert blocked plans to locate the new alternate secondary school on First Avenue East in Cow Bay, there was uncertainty among the public as to whether the school would be able to open on Feb. 2, which had been the goal of staff since summer. But School District 52 was quick to revisit its options and settled on a centralized location.

"The new location for Pacific Coast School will be the old Hecate Strait building on Second Avenue," said Mercer. "I am happy to say we signed a two-year lease with the present landlords, and although it is a smaller space than the Sea Sport building, we are confident it will serve the needs of our students."

Having the new school open on schedule was the highest priority because attracting students who are at risk of exiting the school system is a critical aspect of the school's mandate.

Principal Steve Riley, along with Borges and Brown are also hopeful that their different approach to teaching the Grade 8 to 12 curriculum will be attractive to students who are currently enrolled in high school, and those students will be the first ones enrolled.

However, those students who have already dropped out but want to attain their Dogwood diploma are also welcome to enroll.

Mercer also said that he and the Pacific Coast School staff have already visited each of the merchants in the surrounding area to ensure their support for the education of students in that location, which was unanimous.

"Some of them had a laugh with us, asking 'Is this where I'm supposed to protest?" said Mercer. "But as we hoped, everyone we communicated with and spoke to in the area is supportive of the school in that location."

The City of Prince Rupert was unable to fit School District 52 into the regular meeting on Monday to give formal approval of the new site.

However, the city has committed to holding a special meeting of council in the next two weeks.
Because the building does not need to be rezoned for educational purposes and after having sought the approval of businesses in the surrounding area, Mercer is certain there will not be an issue with opening Pacific Coast School next month at the new location.
Posted by . at 3:48 pm