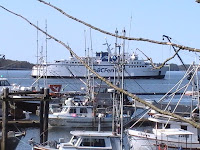 Faster than expected construction repairs to the BC Ferry docks on the Queen Charlotte Islands will bring good news to travellers as BC Ferries is set to resume sailings between Prince Rupert and the Charlottes.
.
If all has gone as planned, the first sailing was set to take place at 11:89 tonight, with a sailing out of Prince Rupert. BC Ferries will adopt a modified schedule until February 2nd, when the full regular schedule will be back in effect.
The surprise announcement was made Friday as the pace of modifications to the Charlottes dock proved to be faster than originally anticipated, originally the plan was for the ferry service to remain tied up until the first week of February, a move that has necessitated that Islanders seek out spots on an air schedule that provided for trips on a first come, first fly basis until all spots were filled on the pre arranged flights.
The resumption of sailings will be a welcome relief to Islanders needing to get to Prince Rupert for health appointments, shopping or visiting family and friends, it also will be a highly welcomed bit of news for All Native Basketball Tournament participants and fans, who were facing the prospect of a just in the nick of time resumption of service to get to Prince Rupert for the 50th anniversary of the tournament, now with the service back in place the travel plans will prove to be a little more reliable and more easily managed.
Full details on the resumption of service and the scheduled times of departure can be found on the BC Ferries website.
Queen Charlotte Islands Obsever-- Ferry service resumes Sunday
CBC-- Queen Charlottes ferry service to resume Sunday night
Posted by . at 11:02 pm

Labels: BC Ferries service to QCI