BC Ferries to face many questions during February trial 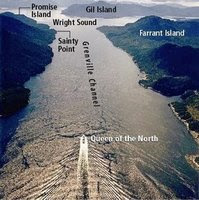 "She had no concept of navigation, of anything. This person at the helm did not know what GPS [global positioning system] meant. I don't mean what the letters stand for. She didn't know what that was." There was no evacuation plan in place at the time."-- verbal impressions of the situation on the Queen of the North, provided in court by the lawyer for the family of Gerald Foisy, one of the two victims of the Queen of the North sinking of March 2006
When BC Ferries goes under the microscope in court on February 2nd, some very troubling questions are bound to be asked, that as lawyers for the family Gerald Foisy reveal some serious concerns over the state of training at BC Ferries and the corporations capacity to deal with a tragedy, such as that which struck the Queen of the North almost three years ago.
While the family of Shirley Rosette has settled out of court with the ferry corporation, the family of Mr. Foisy intend to take their case to court on February 2nd, at which time their attorney Marilyn Sandford will continue to ask questions about the training of those who were on watch on the ill fated trip.
Those questions, which if the pre trial conversations are any indication, could prove to be ones of BC Ferries which will shock the residents of British Columbia, many of Sandford's points of concern have found their way into the Vancouver papers over the weekend.
That's a situation which BC Ferries is reacting to with a full charge of rebuttal, advising that some of the accusations raised by Foisy's lawyer are false and should not be in the public sphere at this time, of particular concern to the Ferry Corporation is the accusation that a proper evacuation plan was not in place on the night in question, a suggestion the Corporation says is untrue.
Regardless of their wishes those concerns are now out for the public to consider and judging by the amount of media attention the story has received so far in Vancouver, those questions will be among the many that BC Ferries will face in court, and once they are out there, it won't be long before once again a call for a full public or criminal inquiry is made.
Something obviously went terribly wrong three years ago in the waters of coastal British Columbia, we are still no closer to answers today than we were in the early days following the tragedy and British Columbian's are still suspicious at all the behind the scenes maneuvers that have kept full disclosure from the public domain.
The lack of transparency and perception that we are being kept from the full story, is not building confidence in both the Ferry Corporation or all levels of government when it comes to the safety of our Ferry Service.
February's court case may be the spark that is needed to finally provide a complete and clear review of the events leading up to the sinking and the handling of the disaster in the minutes and hours that followed.
.
Jan 11-- Ferry crewperson untrained, says lawyer
Jan 10-- Ferry helmswoman 'had no basic concept of navigation'
Jan 10-- Judge to rule on splitting B.C. Ferries trial
Jan 9-- Ferry crew 'had no idea' where Queen of the North was, claims family's lawyer
Jan 9-- Ferry helmswoman had 'no concept of navigation', judge told
Jan 9-- Family of Queen of the North victim settles lawsuit with BC Ferries
Posted by . at 1:24 am

Labels: BC Ferries training, The sinking of the Queen of the North