Fix your sink to fix the economy? 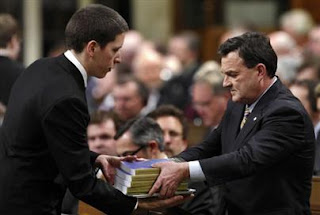 Alan MacEachen delivered Pierre Trudeau’s federal budget yesterday, ooops sorry, meant to say that Jim Flaherty delivered Stephen Harper’s federal budget, it's sure getting hard to tell the two eras apart all of a sudden, must be a lot of smiling ghosts rambling around Parliament Hill these days.
Mr. Flaherty introduced an incentive laden document as he arrived on Parliament Hill yesterday, one that had something for everyone, almost a chicken for every pot and anything and everything including a kitchen sink. All of it designed to pull Canada away from the global economic carnage that is reported on a daily basis now.

According to the National Post which apparently still has enough employees for such things as counting, there were 109 separate initiatives listed in the 360 pages of five books delivered with the budget, a smorgasbord of spending, tax relief and financial assistance all provided with the frequent reminder that these will be challenging times for all Canadians.

Not since the era of Pierre, has a Canadian government offered to spend so much money, every corner of every province seemingly will find some kind of federal money arriving in the electronic mail as bridges, roads, schools and hospitals all get at least a fresh coat of paint all part of the group effort to aid the economy.

Interestingly enough, the Harper government is going to fund the arts again, it was their reticence to do so in the last campaign that cost them their much cherished majority in the last election, as the artistes of Quebec recoiled at the thought of not receiving any more federal dollars. Now in a grand announcement worthy of the Trudeau ear, those Brinks trucks will roll again, perhaps far too late to rebuild the Conservatives brand in that province, but perhaps enough to keep grateful mimes, chanteuses and poets off the EI lines for the next few years.

Overall the budget seems to come down to some key points for the rest of us.

If you’re a city, with or without financial troubles those potholes and sewers may not yet get any attention, as part of the federal/provincial financing of infrastructure, communities will still have to pony up a share (as of yet undetermined but anything over a buck may be a problem) of the cost or those projects won’t happen, and by the way cities you only have a two year window to grab the treasure.

If you’re a Canadian on EI or about to go on EI, you’ll have five extra weeks to worry about finding another job, the claim period was extended by five weeks in a nod to the growing difficulty that Canadians may find in their new job quest.

If you’re a lending institution (we gather that means banks, credit unions, Tony the thumb, etc) check the mail, the government is backstopping the lending industry with some 50 million more for the Insured Mortgage Lenders Program, designed to loosen up the credit for would be home owners or business developers.

And if you’re looking to renovate the house, this apparently is the time to do it, under the Household infrastructure section of the budget; the government apparently will let you write off a number of those expenses when it comes to fixing up the house. Make sure you register your renovations at City Hall though, just in case the two governments decide to share information. Nothing worse than getting a tax break, especially if you didn’t take out a building permit…

Just think, your leaky faucet and desire for a new kitchen may be the key to the economic turn around, so make your decisions wisely. To borrow a phrase from President Obama, Yes You Can...

Speaking of decisions now comes the part where the opposition has to decide whether they will support the epic financial wishes of the formerly miserly Conservatives, suddenly reborn as big picture Liberals.

The Bloc and the NDP apparently not inclined to read the document having already decided that this government must come down (preferably with the dream team of the coalition to take its place) their No’s already proclaimed even before Mr. Flaherty made it into the House of Commons.

The Liberals slept on things, Michael Ignatieff waiting until 11 am in Ottawa, 8 out here in infrastructure land, finally deciding that the 37 billion deficit this coming year doesn’t need the extra cost of an election tagged onto it.

And while he made all the noises about putting the Conservatives on probation, in reality what he’s doing is biding his time. Better to let Mr. Harper suffer the horrors of a severe financial downturn, able to sit across the aisle and offer up advice through the year and then when the Liberals have their internal and financial ducks in a row, say enough is enough, outline how he believes the Conservatives have mismanaged things and then bring down the government.

That is of course providing that your renovation plans don’t single handedly turn this economic titanic away from the oncoming ice berg.

Fix your sink, repair the floor, spend a bit and maybe borrow some more… (though we seem to remember this is how the world got into the mess in the first place isn't it?)