Civic Centre ready to unveil state of the art seating, just in time for the ANBT 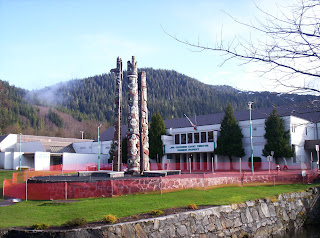 With tip off fast approaching for the 50th anniversary of the all Native Basketball Tournament, the City of Prince Rupert’s Civic Centre staff is feeling pretty proud of the progress in the refurbishment of the Russell Gamble Gymnasium, home for the majority of the tournament games.

The new seats now installed with only a bit of fine tuning and practice required to maneuver the new seating system. The seats feature a more comfortable product, placed on a motorized platform. With those new seats however, will come new stringent regulations as far as fans go, with an edict now in place that no food or beverages will be allowed in the Gymnasium.

Gone are the days of people sneaking in chips and gravy, pop or other substances to the old style bleachers, with the new cushioned seats relying on the motorized system, maintaining the environment in as pristine a condition as possible will be the rule, with no exceptions.

The Daily news provided details of the new seating system with a story in Tuesday’s paper.

Fans will be able to watch games in plush new stadium seating
BY GEORGE T. BAKER
The Daily News
Tuesday, January 13, 2009
Pages one and two

Perhaps Santa was a tad late this year.

Because when Clarence Martin walked into the Russell Gamble gymnasium and set his eyes upon the cherry red seats and the black seats that strategically spelt 'ANBT' across the main bleachers, his face was that of a child's. It was Christmas in January.

The president of the All-Native Basketball Tournament (ANBT) had just received the gift he had hoped for.

The new foam seating was unveiled to both Martin and ANBT Vice President Peter Haugen Monday, and both were impressed by the quality that was laid out in front of them.

"The visual impact that it makes on me, I can imagine what it's going to make on the fans who've been sitting on hard benches for years. I can imagine when they come through that door there are going to be whispers and maybe shock and awe - if you can use those terms," said Martin.

Beginning on Feb. 6, sports fans will be able to place themselves in the comfy quarters when the Tsimshian Nation opens the tournament with a traditional welcoming.

Installed along with the new seats are high-powered motors that contract and retract the seats so they are not in the way of regular gym users outside of tournament games. It's those motors and the stunning looks of the seats that has the city's director of Community Services, Michael Curnes, desperate to get the word out that no food or beverage will be allowed in Russell Gamble gymnasium - ever.

﻿
"Here in Prince Rupert we have to make things last for 40 years. That's just a fact. With the motors there, you can't have food or pop spilling on to them," said Curnes.

With a price tag of $350,000 and despite the fact that the city is expecting to pick up a significant portion of that through grants, it's important for all involved that the 'no food' order is strictly adhered to. In case anyone gets any bright ideas, the ANBT's security team will be there to strongly remind attendees to keep food out.

The city is going to apply for the maximum 30,000 grant money that is available.

TaLedi Distribution installed the seats at a faster-than-expected rate, installing the seats in just under a month. That expedient gift, along with the new spark added to Russell Gamble gymnasium is expected to go a long way in making the tournament, known as the jewel of the north, a shining example of North Coast-competition.

"I don't think there is going to a bad seat in the house anymore.

"I am really happy about that," said Martin.