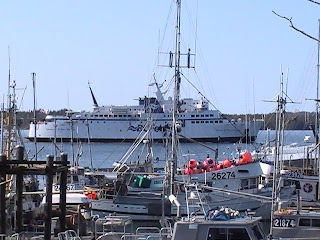 Declining revenues and troubled economic times have combined providing for a storm of fiscal concern, one which BC Ferries has answered with job cuts and early retirements to its management levels.

Monday was a rather busy day in the human resources world as the Ferry Corporation reduced the number of directors on their board, and reduced the numbers working in the management and administration departments by 35, engaging in a process that BC Ferries describes as a process which is “aligning our costs with the marketplace during these uncertain and turbulent times.”

While the positions eliminated on Monday were all staff posts, there are concerns that future reductions may reach into the unionized work force, most of which it is suspected would have to be shore based workers, as Transport Canada has strict staffing requirements in place for ship board personnel on vessels along coastal waters.

The NDP critic for Ferries, North Coast MLA Gary Coons has long been concerned about the developments at BC Ferries, pointing out that hiring has been a frequent topic of interest over the last few years since the company went from being under government contro,l to a quasi private state, all be it one dependant on public funding.

Coons points to a number of recent jobs created or shuffled over the last few years by the Ferry Corporation, which have been exempt from any form of public scrutiny or oversight by the province.

Under its private status, hiring decisions have evolved as an internal process, seemingly with little accountability (or interest it seems) required to the provincial government, even though one would think that they should have an interest in the state of the provinces fleet of coastal transportation vessels.

For Coons and the NDP that apparent lack of accountability is putting the entire coastal system at risk, setting the stage for more layoffs in the future and even schedule reductions as the financial clamp tightens around the Ferry Corporation.
.
BC Ferry President David Hahn, takes exception to the recent and past statements of Mr. Coons, claiming that the Corporation is hardly secretive and that their books are open, that tone of debate continues on with what is becoming a regular exchange between the two over issues regarding the current status of the Ferries as a quasi private operation.

It has long been a desire of the NDP to see the Corporation returned to the domain of the provincial government, the suggestion being that the transportation network is far too important to the people of the province, to be allowed to remain in the rather secretive world of private enterprise.
Critics of that thought point out that the Ferry Corporation has always been a handful for whomever is in charge, be it as a government agency or in its current configuration.

The current fiscal trouble, when combined with challenging employee/employer relations and recent maritime incidents, only seem to add to the belief that it is a corporation that needs a full review. An overall assessment and audit, of where things stand at the moment and where they may be going in the near and far term. What seems to be needed rather quickly is an item by item examination of what is working, what isn’t working and what is truly best for the Corporation, its customers and province’s taxpayers.
.
For now though it must be getting a little uneasy for those that work for the Ferry Corporation, a memo obtained by the Vancouver Province provided the kind of statement that won't do much to soothe the workforce, as management advises that "over the next few weeks, further adjustments in roles and responsibilities may be required as we implement these changes."

While the employees begin looking over their shoulders over their job security and wonder if they'll be one of the "changes", the process of fleet replacement continues on.
.
At the same time that they were handing out their layoff notices on Monday, the Ferry Corporation was also announcing the finalization of its loan for the soon to be in service Northern Expedition.

A 108 million dollar loan agreement was just completed with a German bank, providing for a twelve year loan with an interest rate of 2.95 per cent, with the I’s dotted and the T’s crossed on the loan, the Northern Expedition will now soon set sail for North America, with an anticipated departure date from its German birthplace set for January 29.

What remains to be seen, is how many will be left on the employment rolls at BC Ferries to welcome the new vessel to the fleet.