More anger directed at BC Ferries on the Charlottes 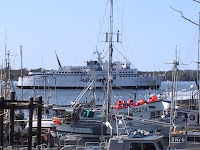 It's getting hard to decide which organization is on the dirt list more on the Charlottes, Canada Post or BC Ferries.
The Ferry Corporation which recently shut down its service this month to the Charlottes from Prince Rupert due to dock repairs required on the Charlottes, now has to try and explain why the inter island ferry serving Sandspit to Skidegate suddenly has to take less passengers per trip.
Despite a 2 year lead time from Transport Canada, the Ferry Corporation has chosen to reduce their loads as per new requirements of the shipping act, all because they are still awaiting the proper certification from Transport Canada.
The tardiness in the ferry corporation's approach to the issue and the trouble it has caused for residents of Haida Gwaii has raised the ire of the MLA for the region Gary Coon, he outlined his concern and anger with BC Ferries in a Wednesday article in the Daily News.
.
BC Ferries new rules has fewer passengers on sailings
By George T. Baker
The Daily News
Wednesday, January 07, 2009
Pages one and five
North Coast MLA Gary Coons wants to know what took BC Ferries so long?
After passenger capacity on a BC Ferries Haida Gwaii service from Sandspit-to-Skidegate this New Year was curtailed on Jan. 1, Coons said the ferry operator had known for two years that the service would need to see reduced passenger loads.
"In 2007, the crewing regulations were supposed to be enforced," said Coons. "These are not new and not a surprise."
The Canada Shipping Act of 2001 mandated that by 2007 ships had to have a minimum number of crewmembers per passenger. For 150 passengers, at least five crewmembers would be necessary. However, BC Ferries was able to get a reprieve for smaller ferry sailings until 2009.
According to an internal BC Ferries email, a decision was reached in the final hours of the year to cut loads from 150 to 36.
"The requirements for the Minimum Safe Manning certification to be in place for all Canadian ships is midnight December 31st 2008," wrote BC Ferries Marine Superintendent Captain Stephen Poole to Kwuna Captain Chisolm New Year's Eve.
"BC Ferries has been working relentlessly for the past 12 months to have all the documentation in the hands of Transport Canada in a timely manner so we would meet this deadline. We had accomplished this many months ago, however, Transport Canada is still reviewing some of our documentation and has not issued MSM certificates for all our vessels as yet."
Poole instructed Chisolm to tell passengers who had suddenly become 'excess' that they would have to wait for the next sailing.
Aggravating the situation, it appears that the North Coast Ferry Advisory Committee (FAC) was again not consulted over the issue and was not informed before BC Ferries made the decision to comply with the Transport Canada's mandate that the ferry could not operate until a fifth crew member was found for the sailing.
"BC Ferries knew since 2001 and failed to plan, prepare and communicate to FACs and communities," said Coons.
In an email from Village of Queen Charlotte Mayor Carol Kulesha to Cpt. Poole, Kulesha complained that the FAC had not been kept informed about BC Ferries plans for Jan. 1.
"I understand that negotiations have been ongoing and this decision by Transport Canada was unexpected. Nevertheless, the members of the FAC should have been made aware of the possibility of Kuwna staffing requirements over these past two months of discussion," wrote Kulesha
That marks the second time in six months that a significant decision affecting North Coast ferry users was made without consulting the North Coast Ferry Advisory Committee and brings to question whether or not the FAC has a role in decision-making.
BC Ferries apologized after it decided to cut the Prince Rupert-to-Skidegate sailing for January so that upgrades can be made to the docks for the arrival of the Northern Expedition in March.
To cover for that, BC Ferries is offering flights with Hawk Air until February. But those flights will mean some increased traffic for Kwuna sailings.
"BC Ferries needs to increase its staff until discussions with Transport Canada are resolved.
"Bring in relief staff from other terminals to fill in on a temporary basis to meet the safety requirements of Transport Canada and begin recruitment now for the long term if it becomes necessary," Kulesha warned in the email.
Posted by . at 8:02 pm