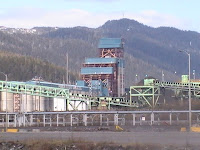 As Western Canadian Coal makes plans to make some changes to its production plans in 2009, the impact on Ridley Terminals could be a sizable reduction in the volume of coal shipped out of the Prince Rupert port.
Western Canadian is reported to be considering reductions in volume to Prince Rupert of 50 per cent as demand for their product declines amid the current uncertainty of the economic climate. Officials at the company are quick to remind people however that all of their plans are contingent on the demand on the world market, which will dictate the amount of product that they will provide in the next twelve months.
The news hasn't for caused much in the way of change for the plans of operation at Ridley Terminals as Chairman Dan Veniez doesn't anticipate any major alterations to operations heading into 2009.
The Daily News outlined the background on the reduction of production and its impact on Ridley as part of the Wednesday paper.
Ridley likely to see coal volume fall
Mining operation will be cutting production but no job impact expected
By George T. Baker
The Daily News
Wednesday, January 07, 2009
Pages one and three
A major customer at Ridley Terminals Inc. is expecting a slower year in demand for coal products and will be almost halving the amount of coal it ships through Prince Rupert.
Western Canadian Coal, which began shipping its low-volatile PCI coal through Ridley in 2007, will be cutting production in two northern mines, the company said Tuesday.
"I emphasize these plans are contingent on what the demand of metallurgical coal will be for the next coal year," said WCC President and CEO John Hogg.
"Whether we reduce operations and to what levels, will depend on the demand for our coal. We hope this will become clearer in the coming months. Until then, we continue to focus on working safely, increasing productivity and lowering costs to remain competitive through these difficult times."
The announcement Tuesday has put a damper on what has otherwise been a solid relationship for Ridley.
Originally, when the Brule mine project began, WCC expected to deliver 800,000 tonnes per year through Ridley but last year the company produced 1.3 million tonnes.
The news comes as another example of how global demand for resources have taken a hit in the last six months.
In November, WCC announced record returns for its 2009-second quarter, where the average realized price of $279 per tonne in the current quarter was 252 per cent higher than the same quarter of 2008.
Reduced operating rates resulted from rising inventory levels as some customers defer shipments through the next few months.
With the current production curtailments taken by some customers, along with the uncertainty of the coal markets beyond April 2009, WCC has made these decisions.
WCC said it expects to operate at these rates until the current economic uncertainty improves and the demand for coal becomes clearer. When the markets do improve, the company has the flexibility to quickly increase operating rates and also pursue its growth plans.
Global demand for coal has weakened since 2007 leaving major coal producers with surplus coal stock instead of surplus profits.
South Africa's Richards Bay Terminals, the world's largest coal exporter, shipped 6.6 per cent less coal in 2008 than 2007.
China, the world's second-largest user of natural resources, has slowed its growth of coal use and expects it only to rise by 4.5 per cent for 2009 from 2008.
Back in Prince Rupert, Ridley Terminals Chairman Dan Veniez said that the coal market can "turn on a dime" and that WCC's announcement was not necessarily unexpected, given current credit crunch.
While he would not go into specifics about the troubles facing WCC, he did say that the ripple effects at Ridley would not create layoffs.
"At this stage, however, we don't anticipate any change in employment levels at RTI, and certainly no changes are even being remotely considered," said Veniez. "We're very proud of the extraordinary productivity and efficiency performance shown by all RTI employees. They've done an incredible job over the past several months. Our costs are under control and our customers are being served extremely well by our workforce at all levels."
Posted by . at 2:31 pm