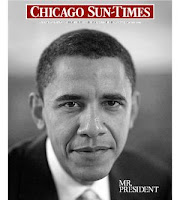 The headlines of Wednesday morning will tell the story of a historic Tuesday, as Barack Hussein Obama was elected as the 44th President of the United States. A watershed mark in American history and one that set off much celebration in the streets of many of America's largest cities.

By shortly after 11 PM, Senator Obama had collected both the required number of electoral college votes and a healthy bulge of the popular vote, completing his remarkable rise in the Democratic party and his date with destiny as the first African American President of the United States of America.

His political rival in this campaign, John McCain provided a gracious concession speech, never an easy thing for a candidate to deliver. The rancour of the long campaign was expunged from the vocabulary on this occasion, providing a commentary that hit all the required notes and returned Senator McCain to the high ground of political class, signifying as it did, his acceptance of the change of direction that America had chosen on Tuesday night.


President elect Obama's speech of Tuesday night, as all of his public appearances seem to do, soared far beyond the regular political housekeeping of the occasion at hand.

From his nod to the struggles of the civil rights movement and the obvious devotion he had for his recently passed away grandmother, to his reach out across the American political divide and his tribute to his vanquished competitor, Obama crafted an eloquent and hopeful expression of gratitude of the confidence of the American people.

He reminded the hundreds of thousands in Grant Park in Chicago and the countless hundreds of millions watching on television that the US Election wasn't just a domestic event. The process of American democracy is an evolution that is watched around the world. Both friends and foes of the United States will be watching the developments in America with much interest, some anxious to rebuild the tattered relations of the last eight years, others ready to test this young President to be as never before.

America turned another page in its most remarkable history, bringing forward a day that many thought would never happen. Providing for a result that leaves many with a feeling of hope and belief that better days for the Republic will soon be on the way.

That of course may or may not come to pass, there are far too many external forces that can change events in a moments instance, but for one night in November, for a good portion of America, there is a renewed belief in the promise of the nation.

It has proven to be a most historic night, one built upon the promise of hope and change.

The blue print for that change was provided in Senator Obama's address of Tuesday night, the process of delivering that destiny to America begins Wednesday morning.
You have to admit to a bit of envy of them for their journey ahead.