A look back and then to the future 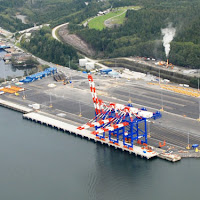 With a year under their belt, the stakeholders of the Fairview Container Port have taken a look back at a rather exciting year which changed the nature of the Prince Rupert waterfront forever.
From a longshore work force tasked with new duties from their recent past, to the arrival of New Jersey's Maher Terminals to the west coast, the last 365 days of operations have provided a template for the future.
With ambitious expansion plans on the books, tempered we suspect by an eye on the currernt global economic troubles that may provide for an impact on current and future plans in the short term.
.
For now though it was a look over the progress of the long sought after goal of a northwest gateway to Asia, which opened its gates to business in 2007.
The Daily News featured the snapshot of Prince Rupert's historic change as the front page, headline story in Wedensday's paper.
PORT PARTNERS LOOK BACK ON YEAR IT ALL CAME TOGETHER
After first 12 months in operation, the new container port is delivering on potential
By Kris Schumacher
The Daily News
Wednesday, November 12, 2008
Pages one and three
One year after shoreworkers at Fairview Container Terminal successfully unloaded Prince Rupert's first container ship, project partners reflect that employer-employee relations have never been better.
The beginning of operations took place on Wed., Oct. 31, 2007, when the COSCO vessel ANTWERP berthed during what workers recall was one of the worst days of weather the North Coast port has seen during the past 12 months.
The successful arrival and departure of that first 5,400-TEU (20-foot equivalent units) ship, and the on-time service of that first CN train carrying cargo to Chicago both served to prove true the promise that the Port of Prince Rupert made to the world shipping community.
On Saturday, shoreworkers and management at the Fairview Container Terminal were celebrating the milestone with a dockside barbecue for the roughly 180 employees on all three shifts.
While crews worked early Saturday afternoon to load containers aboard the COSCO VANCOUVER, representatives from Maher Terminals and the International Longshore and Warehouse Union reflected on what had been accomplished in the previous 12 months.
"From a year ago to right now, the morale has increased positively by about 100 per cent," said Glen Edwards, president of ILWU Local 505.
"Last year, when we started, the guys on the lower boards and the new hires were getting one day a week.
"Now, those same guys are getting three or four days a week, and I don't hear any more complaining. Basically, there are smiles on everyone's faces and real positive attitudes."
Edwards said there were some issues that the union and management had to work through, but now with most issues settled everyone can look forward to successfully expanding the operation in the next few years.
Mark Schepp, assistant vice president of terminal operations with Maher Terminals, agreed that the improvements in productivity, safety and training among the workforce have been significant.
"From the Maher perspective, partnering with Local 514 has been a really good experience for us and they've been great partners for us," said Schepp. "When you throw in what CN has done as a partner, it's been a very good year for us. I think we're proving that Prince Rupert is a gateway that works, and we're looking to take advantage of that."
However, the world economy is obviously a concern for Maher and all the Fairview partners, and although everyone would like to believe a severe economic downturn will not affect the operation, Schepp said they will be in a better position to gauge the local impact in the first quarter of 2009.
"We anticipate that with our current two services, we won't have much of a downturn in the labour requirements here," said Schepp.
"The skill and dedication of the workforce here is right where it should be, and we've positioned ourselves at the right place and at the right time to do more business."
Posted by . at 7:42 pm