Can Prince Rupert continue to run counter to the west coast port slump? 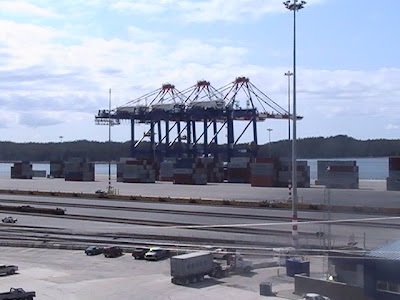 While the Port of Prince Rupert remains rather bullish about its future, events beyond their control may change the dynamic of the global shipping industry and how it looks at the North coast.
An Article in the San Francisco Chronicle presents some stark details about the current troubles of the west coast port industry of California, Oregon and Washington state. Where the cargo loads are dropping and the competition from the east coast and the US southeast continues to chip away at their once dominant position.
The Chronicle report reviews the declines, which have seen west coast ports suffer their slowest years since 2004, a situation attributed to the competitive nature of the other ports, the declining economy of North America and closure of factories and re-routing of shipments by Asian shipping lines to other destinations.
The report highlights how fast change can come to the industry and is a rather interesting snapshot of where the transportation scene up and down the US West coast is at these days, a situation that will make them very competitive for the remaining trade and eager to return their share to their once thriving levels.
How they handle their declines and decide on how to battle back for it, could have a major impact on the number of containers that pass through the Fairview Terminal. Making for another reminder that Prince Rupert is in a league with the big kids now, a place where the stakes are high and the push for market share always ongoing.
Ship cargo volume slumping at West Coast ports
George Raine, Chronicle Staff Writer
Sunday, November 30, 2008