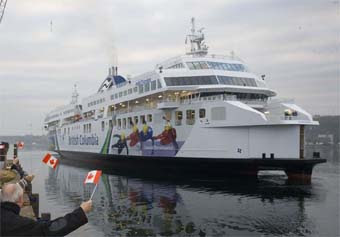 The Gordon Campbell Liberals have made much in the way of political hay over the once promising but eventually dry docked Fast Cat ferries of the Glen Clark era, frequently pointing to their berth in North Vancouver and suggesting that the NDP government of the day had made a mess of ferry procurement for years.

Fast forward from the Fast Cats and say hello to the new Super C-class ferries the Coastal Inspiration and the Coastal Renaissance, the pride of the German shipbuilding industry and if some of the stories starting to come out are true, soon to be a harvest of potential political misery for Gordon Campbell.

The Tyee is reporting that the newest boats on the block are a troubled group of vessels, that may feature a number of design and fuel consumption flaws that won’t be making them the showcase of the fleet any time soon.

One of the concerns about the new vessels that the Tyee reported on is that of cavitation, where the propellers of the new ferries don’t sit deep enough in the water to provide for cost effective fuel consumption and quiet propulsion of the vessels. One of the complaints of those that are familiar with the new vessels is the noise and vibration of the ferries as they cross the Strait of Georgia, which according to naval architects contacted by the Tyee could possibly be caused by a design flaw of the new ferries.

The Tyee lists a number of the other concerns of the new vessels, which are to replace the more aging ferries of the southern crossings. Of interest to North coast residents as well as those on the Charlottes and central coast, is the fact that the same shipyard FSG is designing and building the replacement vessel for the Queen of the North, a run which of course provides for its own challenges far removed from the rather sedate crossings of Nanaimo and Victoria to Vancouver.

North Coast MLA and Ferries critic Gary Coons has expressed his concern over the rumblings about the new vessels. He points out that the Liberals removed the Ferry Corporation from the need to provide public information when they made them exempt from the Freedom of Information laws.

A move which has effectively provided for a cone of silence of sorts to descend on these new vessels, leaving taxpayers and ferry users unable to learn of any potential problems that the vessels may be facing. With no form of oversight or public examination in place to safeguard the province’s investment there is no real sense of accountability over the decision to purchase offshore vessels, nor track the troubles as they come up.

While the “growing pains” of these new vessels will be covered by warranty and are being downplayed by the Ferry Corporation, it seems as though the newest additions to the BC Ferry fleet could soon be best known for their flaws rather than their cutting edge technology.
.
While the Tyee provides the litany of troubles that they have been informed of, the National Post has provided a bit of cover for the embattled Ferry Corporation, suggesting that time and the shake out process may prove that many of these troublesome allegations will be proven moot over time.
.
In the end it will be the ability of the vessels to perform to expectations that will deliver the verdict, if in a year or so they too are tied up to a deserted pier in North Vancouver, sharing space in infamy with the Fast Cats, then we guess we'll have an answer and the Liberals will have a handful of electoral trouble.

When the Liberals defeated the NDP at the polls to form the government, they used the Fast Cats as the sign of NDP arrogance and incompetence, all that was wrong with the last NDP government.
.
It would be most ironic, if that view of history will now be revisited with a new generation of ferry troubles, these ones tied completely to those who were throwing those stones in years past.
Posted by . at 11:52 pm