City to seek financial help for Ferry Dock from Ottawa 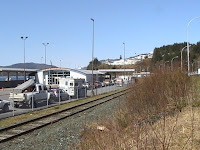 Using the observation that the Alaska Ferry Dock is an international gateway to Canada, the City of Prince Rupert is seeking out some assistance on the rising cost of the expensive repairs that have been made so far and those that are still required to the southern terminus of the Alaska Marine Highway.
With the federal election over and the players back in their familiar places, the City is preparing to deliver a letter to Ottawa outlining the project, its cost and how in the city's opinion, the federal government should be helping out when it comes to picking up the tab.
Councillor Tony Briglio seems to have taken custody of the issue in the short term, offering up his interpretation of the requirement of Federal funding for the project and how if none is forthcoming, the financial cost to Prince Rupert will require some new arrangements for the remainder of the city's infra-structure needs around town. He also outlined some of the ideas that the city has been mulling over to take on the current financial limitations that the city faces.
The Councillors thoughts and more background on the topic were found in Tuesday's Daily News.
City still hoping to get help with dock repairs
By George T. Baker
The Daily News
Tuesday, November 04, 2008
Pages one and five
The City of Prince Rupert is hoping that with the federal election now out of the way it can petition the federal government for some money for the Alaska Ferry Dock.
A letter from Prince Rupert Mayor Herb Pond was sent to NDP MP Nathan Cullen's office on Sept. 3 looking for support in drumming up federal government for funding. Four days later, the federal election was called, putting off any possible support for funding for the Alaska Ferry Dock.
"We would like the federal government to step up to the plate and recognize that Alaska is in the U.S. and this is a point of entry," said Councilor Tony Briglio.
According to the city's proposed 2008 financial plan amendments, the city's capital works' costs are expected to exceed the budget for 2008. The Alaska Ferry Dock is one of the reasons why, because the original $900,000 given by the city for the project will not be enough to get it retrofitted.
The provincial government has already kicked in $350,000 for the retrofit but the city has to put up the other two-thirds.
Seeing as how the dock works as a border crossing, city hall wonders just why the municipality should foot two-thirds of the cost.
Briglio said that some money could and possibly should be used from the Northern Development Initiative - money for upgrading local infrastructure.
"This is one of the reasons we are trying to get the manpower to deal with these types of things - people who write proposals and get them in," said Brilgio.
He added that the Skeena Queen Charlotte Regional District has hired a person to attract some of the NDI money and that the city would also like to bring someone in to do the same.
But there are other concerns the city is facing financially that make it hard to foot the bill for something that could be seen as a federal project.
Last week, Prince Rupert's principal source of water supply burst, leaving the city with another cost to face for its infrastructure.
Briglio said that the city still doesn't know how much the repair job for the Woodsworth Lake pipeline repair will cost but it is yet another cost the city must buck up for.
And according to him, the city might have narrowly escaped an even greater catastrophe.
"It could have been a real big deal if that pipe was pushing water through it," said Briglio.
Posted by . at 12:55 am