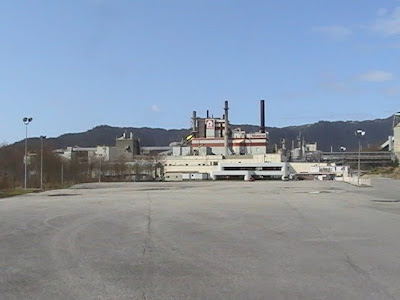 While the days of pulp and paper making seem far in the past, the ghosts of Watson Island continue to appear from time to time.
We haven’t seen, nor heard much from China and the SunWave ownership group lately, the owners and would be operators of the mothballed Skeena pulp mill having kept a rather low profile in the last year or so.

However, it seems there’s nothing like a tax bill to get someone’s attention.

Sun Wave’s management has put in an appeal with the BC Property Assessment Appeal Board seeking a hearing on the recent assessment of the property for 2008.

There has yet to be a date issued for the appeal, but city officials suggest that it will carry through into 2009 and most likely won’t be resolved until the summer.

The Sun Wave situation continues to carry a cost to the City of Prince Rupert of around six million dollars, however the City’s Chief Financial Officer, Dan Rodin says any decision by the Assessment Appeal board won’t impact on the city’s finances.

The owners of the Watson Island pulp mill are appealing the mill's property tax assessment.

SunWave Forest Products, a subsidiary of the China Paper Group that also goes by the name China Pulp and paper - a subsidiary itself to the China : trade International Holding Co. - is the sole owner of the property.

That company has booked a hearing with the BC Property Assessment ﻿Appeal Board. The city has not yet been informed of the date when that hearing will take place.

According to the city's chief financial Officer, Dan Rodin, while it is not known when the hearing will happen, it should not impact the city's finances.

Rodin said at Monday's special council meeting that finances are healthy even with the $6 million weight of the Watson Island pulp mill still tied to it's neck.

Rodin said he expected the Sun Wave property appeal to roll over into next year, meaning no resolution should be expected before the summer.

"Other than that, we are doing well," said Rodin. "We've made sufficient provisions, we believe, for any kind of an ﻿assessment that SunWave gets."

Councillor Kathy Bedard wondered if the conservative assessment of the property taxes that the city would receive from SunWave was included in the reserve figures.

Rodin said that it was part of the reserve side of city budgeting.

"The numbers you have there, we are very confident that we'll do that or at least better by the end of the year ﻿once this issue with SunWave gets resolved," said Rodin.

The city is expected to transfer an extra $2.55 million into reserves meaning the city will be building up its finances, according to outgoing Mayor Herb Pond.

The amended budget finalized on Oct. 31, predicts the city will collect $13.2 million in tax revenues from residents and business.
Posted by . at 12:04 am