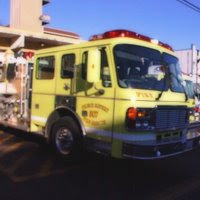 The recent downsizing of schools on the east side has streamed more students and equipment into the remaining rooms of education, a situation that at times is making for rather crowded and cramped quarters.

It’s that challenge of overcrowded conditions that has become a point of concern for the Prince Rupert Fire Department, which recently concluded inspections at two schools on the east side of the city, finding that the storage of desks in hallways a situation that is not allowed and would be an issue of concern for the fire department.

Prince Rupert Fire Rescue conducted their inspections after they received calls of concern from the public over the overcrowded nature of the hallways and classrooms. The School District is working to address those concerns and hopes to have the issues rectified by Christmas.

The background on the story was featured in Tuesday’s Daily News.

The closure of Kanata and Seal Cove Elementary Schools has presented new challenges in the form of overcrowding and created safety fears at receiving schools so far this year.

Prince Rupert Fire Rescue conducted fire safety inspections this month at Conrad Street and Lax Kxeen Elementary Schools, after receiving calls that the hallways and some classrooms were overly congested with tables, chairs and other items.

Obviously, with the influx of many new students and teaching materials at the two eastside elementary schools, staff have been challenged with the issue of space.

But as the Deputy Fire Chief Dave McKenzie told the district, using hallways is not a viable option for storing extra school resources.
“It’s a work in progress,” said McKenzie.

“The schools aren’t unsafe, but we can’t have stuff like desks and tables set up in hallways because it’s just not allowed. They’ve been working on it since we did the first inspection and they’ve done quite a bit of the stuff needed already. We know the classrooms are maximized, but it doesn’t change the rules.”

School District 52 Secretary Treasure Kim Morris confirmed that district staff have been working to address the concerns brought forth by the fire department, but said that not everything on their list had been completed yet. It is hoped that before Christmas all the items will be stored safely within the schools or in another district building.
Posted by . at 2:29 pm

Labels: crowded schools and issues about them, School District 52