Northern Expedition is on the clock... 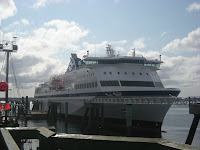 The training missions and public tours complete and her maiden voyage behind her now, the Northern Expedition is truly part of the fleet now, having completed its first turnaround voyage, firmly in service as the latest vessel that BC Ferries has introduced to the coast.

The Northern Expedition completed its first journey from Port Hardy yesterday and now is on its way south, completing the Port Hardy round trip experience and providing a vital link between the North Coast and Vancouver Island, while offering a new level of transportation for those that take the ferries. Many of the details of the amenities available on the new vessel were provided in a BC Ferries news release celebrating the first journey.

The first trip for the Northern Expedition included both paying customers and dignitaries who took part in the inaugural sailing, coming just weeks after the Queen of Prince Rupert was retired.

The design of the new vessel has been created to enhance tourism along the North and Central coasts an on to the Charlottes, part of a concerted effort by BC Ferries to increase traffic from those that are seeking a cruise like journey while they take their cars.

The first trip off of Haida Gwaii was recorded in the Queen Charlotte Islands Observer, which provides a small glimpse at the events of the maiden journey and the hopes that come with it for the transportation industry of the Northwest coast.


A proud day for BC Ferries
Queen Charlotte Islands Observer
Monday, May 18, 2009

The Northern Expedition is making is inaugural sailing today, and will arrive in Prince Rupert at 10:30 tonight.The ferry left Port Hardy early this morning, carrying several hundred customers and dignitaries.

The 150-metre vessel will make the 274 nautical mile run every day throughout the summer. It has 55 modern staterooms and can accommodate 600 passengers and 130 vehicles.

"This is a proud day for BC Ferries as we enter a new era for our north coast service," said Mike Corrigan of Ferries, "a key element of our marketing strategy is to promote this very unique BC coastal wilderness experience."

The Northern Expedition is expected to serve Haida Gwaii for a couple of months each winter, when the Northern Adventure is being refitted.
Posted by . at 10:59 pm