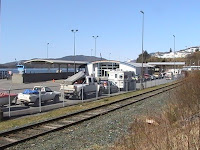 As the Podunkian portal outlined in a midnight post of Tuesday night, the state of alaska is giving some serious consideration to seeking the transfer of ownership for the Alaska Marine Highway Dock at Fairview Bay into American name.
It's a process that could free up vital infrastructure dollars for repairs to the dock providing for a long term plan for the dock and terminal building at the Prince Rupert Gateway.
The Daily News provided some background on the story later in the day with a front page headline story in Wednesday afternoon's paper.
ALASKANS LOOKING TO BUY PRINCE RUPERT FERRY DOCK
Transfer of ownership to the U. S. authorities may guarantee dock's long-term future use
By George T. Baker
The Daily News
Wednesday, December 17, 2008
Pages one and two
The state of Alaska can no longer wait for the City of Prince Rupert to secure funding for the Alaska Ferry Dock. Instead, early plans have begun to have the state buy the dock outright.
According to Department of Transportation and Public Facilities Chief Communications Officer Roger Wetherall, Alaska Governor Sarah Palin's projected 2010 Budget includes provisions for a $7.5 million purchase of the dock.
"The city hasn't kept up with the maintenance of the facility and that has caused some disruption to service for the Alaska Marine Highway to the terminal," said Wetherall.
The city has been saddled with two-thirds of the costs for repairs to the federal border crossing. The city has come up with the other two-thirds but was hoping for the federal government to step up and cover part of the cost. Alaska is worried that over the long haul the city will not be able to keep up with the cost of maintaining the dock.
In March, an engineering report deemed the Alaska ferry dock unsafe and the city informed the highway system it would have to shut the dock down. The dock was in a state of advanced deterioration.
After service was halted for two runs, the Alaska ferry started to unload at the B.C. Ferries dock.
Because of its agreement with the city, Alaska will not be paying for any of the repairs. But Wetherall said the state government believes that isn't enough to bury safety concerns.
.
"A permanent repair is still needed," said Wetherall.
Unlike the struggles the city has faced with getting federal funding for repairs, Wetherall said Alaska expects the $7.5 million to come from U.S. federal funding. The next step would be to discuss purchasing the dock lands from the Prince Rupert Port Authority, which leases the land to the city.
In July, the province presented a cheque worth $350,000 to the city to get repairs started, with Minister of Transportation Kevin Falcon lending his back for then Mayor Herb Pond to use as an impromptu signing table during the cheque hand-over.
There have also been concerns that the state would pull its dock completely from Kaein Island for political reasons but Wetherall said there are currently no discussions whatsoever with state officials to pull the dock from Rupert's shores.
"We are looking at a possibility with long-term lease with the PRPA if we don't go with the purchasing option," said Wetherall.
Posted by . at 11:44 am