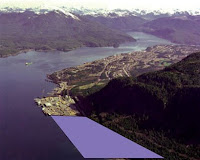 The Globe and Mail is reporting on line and in print today, that the expansion plans for the Fairview Container Port have been delayed by at least eighteen months, reportedly owing to financing troubles and the current worldwide economic climate.
According to the Globe and Mail, which obtained what it describes as confidential documents, the Port Authority has hit what is called a debt wall and will not be able to seek out borrowing on the port's 200 million dollar share of the project to see it move forward. A point that is disputed by Don Krusel of the Port Authority, who is quoted in the Globe article as describing the delay of expansion plans until 2010, as more of a result of the global economic slowdown, a tidal wave of economic factors in the shipping world, than any internal financing difficulties.
The full Globe report will make for interesting reading for local residents who have been hearing much of the ports potential and the much discussed expansion as the engine for the local economy, an engine which at the moment seems to be sputtering a bit.
Also of interest is almost a throwaway line about how Chinese interests had considered building a seperate container facility in the city, which probably will have many in the community automatically thinking of the SunWave investors and their less than speedy regeneration of the Watson Island pulp mill. That bit of intrigue may cause many to wonder if the long running saga of Watson Island perhaps may have been earmarked more as the site of a potential competitive port, rather than a pulp mill.
The Globe story provides for all sorts of behind the scenes details and speculation and a fair amount of background on the high risk world of major project funding, though in the end, the anticipated official announcement of the delay, will make for a disappointing development in the much anticipate port expansion.
.
It will be a delay which will no doubt have an impact on the local economy from real estate through to supplies and services, not to mention as a blow to the morale for the battered north coast economy, still suffering from the fall out of the forestry meltdown in the region and the disastrous state of the fishery.
B.C. port expansion delayed
PATRICK BRETHOUR
December 19, 2008
The port of Prince Rupert is delaying the expansion of its container terminal by at least 18 months, as the global recession and its own financing woes dash hopes of breaking ground on the $650-million project next year.
According to a confidential study commissioned by the federal government, a summary of which was obtained by The Globe and Mail, the port authority has hit the debt wall, with the decline in shipping volumes meaning it will breach federal requirements on its current loans of $22-million.
.
The port authority's limited cash flow, and inability to borrow against its lands, means it cannot support an increased debt burden and will not be able to borrow the $200-million needed for its portion of the Phase 2 expansion, concludes PricewaterhouseCoopers. Prince Rupert has "little or no financial flexibility to move forward with plans for Phase 2 in the short term," says the summary, written in August, before the full force of the economic crisis swept over the global shipping industry.
The head of the Prince Rupert Port Authority confirmed in an interview with The Globe yesterday that Phase 2 has been delayed, and will likely begin in late 2010 rather than the middle of next year.

But Don Krusel, the port authority's president and chief executive officer, attributed the delay to global economic conditions, and the resulting blow to shipping volumes, rather than to the organization's finances.
Shipping volumes at the container port have fallen far short of initial expectations that capacity would be fully taken up this year.
Instead, only about a third had been used as of the end of November, and traffic dipped from the month before. The volume of shipping to Prince Rupert in November, if maintained over a full year, would mean the container port would be running at about 60-per-cent capacity, Mr. Krusel said.
The container port may not reach the full capacity of its first phase until 2010, a consequence of the severe slowdown in transpacific shipping volumes. "You cannot push back against a tidal wave," Mr. Krusel said.
The tidal wave appears to be gathering force. A Canadian Manufacturers & Exporters survey released yesterday indicates that 52 per cent of companies say their orders will likely fall between now and March, l 2009, and that more than one-third believe their inventory levels are too high. Both responses point to reduced demand for imported goods.
The decline has touched virtually every category of products shipped from Asia, including consumer goods and components used in North American manufacturing operations. But West Coast ports have seen particularly steep declines in categories of goods that don't have to be delivered quickly.
The falloff in shipping volumes has demolished one of the key arguments for expansion at Prince Rupert - namely that other ports along the West Coast of North America were running at full capacity. "It was almost like a release valve," Mr. Krusel said.
Now, Prince Rupert must win business on its competitive merits, rather than by default. Mr. Krusel said his port is faring better than rival operations further south.
The PricewaterhouseCoopers document, a confidential memorandum to former transport minister Lawrence Cannon, says Transport Canada believes the port authority should pursue an "incremental approach" to expansion rather than the Phase 2 strategy, which would quadruple the capacity of the container port.
The summary notes that the port authority had not, by August, formally requested an increase in its borrowing limit, and that port officials were still debating their preferred mix of equity, debt and private sector investment. It goes on to say that Chinese investors had expressed interest in developing a separate container terminal in the Prince Rupert area.
Discussions on how to finance Phase 2 are still going on, Mr. Krusel said, while declining to comment on the specifics of those talks. However, the PricewaterhouseCoopers summary lays out four alternatives to simply borrowing $200-million. These include: outright privatization of the port; creation of an entity that would function like an airport authority, and which could use its property to underpin new borrowing; creation of a self-financing subsidiary; and a public-private partnership.
Mr. Krusel said "all options" are being explored.
For the first phase of the container port, the port authority was not able to increase its borrowing limit; the project was eventually launched as a private-public partnership jointly funded by the port authority, Maher Terminals, Canadian National Railway Co., and the provincial and federal governments. Maher has the right of first refusal on Phase 2.
The study summary raises the question that Maher may not be expecting significant traffic increases and will pursue expansion elsewhere. Mr. Krusel, while not commenting directly on that point, said Maher is part of the ongoing discussions. Company officials did not return calls yesterday.
Posted by . at 12:34 am