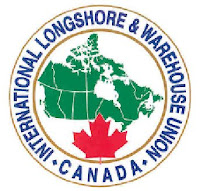 While the clock is apparently ticking on the west coast ports of British Columbia, negotiators for the ILWU Local 514 and the British Columbia Maritime Employment Association intend to continue talks, all in a quest to secure a contract for the 450 managers.
Those managers could bring Canada's west coast ports to a standstill should they set up picket lines, a move that the Employers Association warns could have long lasting implications for the shipping industry and port ambitions for all British Columbia ports.
Wednesday on the blog we provided some background on the potential port turmoil, with details from a National Post story on the percolating labour dispute. A story which ended with the telling quote from the ILWU that "We don't really talk to reporters."
They apparently overcame their media blackout, as Friday's Daily News provided the latest in press releases and talking points from the ILWU.
SIDES CLOSE TO DELIVERING PORTS LABOUR DEAL: INSIDER
Progress is slow but both management and workers are set to get back around the table
By George T. Baker
The Daily News
Friday, December 12, 2008
Pages one and five
British Columbia Marine Employment Association president Andy Smith expects a deal to be worked out with port workers before they ever reach the picket lines.
As reported in yesterday's Daily News, ports along B.C.'s coast are facing a possible shutdown on Jan. 2 if a deal is not reached between the BCMEA and the International Longshore and Warehouse Union local 514.
A strike would effectively freeze ports along the coast, including Prince Rupert's, however Smith said talks are ongoing.
"We are out of the formal conciliation period as of midnight Tuesday and so now we are in what is called the cooling off period, but we are still meeting with the conciliators in the conciliation offices in downtown Vancouver," said Smith.
The ILWU is a labour union that primarily represents port workers from California to B.C. but also includes warehouse workers, cannery workers in Alaska and, oddly enough, bookstore workers in Portland, Oregon.
According to a report prepared by University of North Texas professor of business M. Theodore Farris, ILWU workers were locked out in the U.S. in 2002 and that labour strife cost the U.S. economy $15.6 billion, a chilling reminder of the value of ports.
Smith said bargaining currently is very slow but he was confident both sides were committed to reaching a deal.
"We'll be back at it tomorrow morning," he said.
Smith refuted claims in a National Post story that reported that the biggest issues being addressed were related to workers' pensions and working conditions.
He said some of the obstacles standing in the way of getting a deal reached were focusing on 'minor issues'.
"Look, the maritime industry and deep sea shipping is basically imploding in the wake of the global (economic) recession and we don't quite understand why we are here arm wrestling over these kinds of issues," said Smith.
Provincewide, it looks like B.C. is heading for a recession.
Posted by . at 12:01 am