Port talks to resume on Saturday 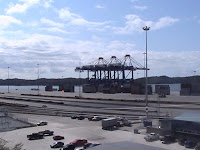 Talks to avert a strike on British Columbia's waterfront will resume on Saturday, as the union representing 540 foremen and the British Columbia Maritime Employers Association strive to continue the progress they made on Monday.

The labour dispute which involves issues such as pension payments and working conditions due to technological advances, had been working against a January 2nd strike deadline, a deadline which has been pushed back by local 514 of the ILWU, while negotiations continue.

A port shutdown, would affect all marine traffic except for federally protected grain shipments and even the prospect of such a disruption has already resulted in container lines diverting their vessels to American ports in order to avoid any delays.

It's that uncertainty that has the BC Marine Employers concerned over the prospect of lost volume and loss of customers.

It was the potential of a labour disruption that saw Prince Rupert Port Authority President Don Krusel drop a line to the Federal Labour Minister, outlining his concerns that any disruption to the flow of trade may have on the Port of Prince Rupert.

While the negotiators and their mediators look over their briefing books in anticipation of Saturday's discussions, local marine labour commentators have been weighing in on the topic over at hackingthemainframe, with a lively and occasionally bare knuckle bit of negotiating of their own.

Other items of interest on the topic: