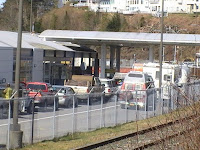 As we outlined earlier this week, the Alaska State Government has been giving some thought to putting a bid in to take over the Alaska Marine Ferry Terminal and Dock located at Fairview Bay.

The plan it seems would turn over that stretch of land to the State of Alaska, which then would access federal transportation monies to make a number of improvements to the dock and terminal building.

The only thing is that the City of Prince Rupert isn’t particularly sure that it wants to sell the land.

While Mayor Jack Mussallem is finding a silver lining in the discussion, that of a renewed interest in a terminus of the service in Prince Rupert, neither is he rushing to grab a hold of the 7.5 million dollars that the state figures the dock and building to be worth.

That’s not to say that in the end they won’t be willing to turn over the dock to the Alaskans, at the moment though it doesn’t seem to be something that they’ve given a lot of thought towards.

The background on the city’s position on the Alaskan proposal and the state of repairs required for the dock could be found in Friday’s Daily News.

The City of Prince Rupert has yet to commit to the idea of selling the Alaska Ferry Dock to the Alaskan government, even with $7.5 million on the table.
According to Mayor Jack Mussallem, the city is open to any proposal by the state to purchase the facility - but it isn't rushing to get rid of it either.
"It is really welcome news that the Alaska Marine Highway wants to maintain a terminus in Prince Rupert," said Mussallem through an email Wednesday.
Known as an extension of the Alaska Marine Highway that connects southeast Alaska, the dock has been seen as a vibrant attractor of tourists' dollars.
As it is a federal border crossing, the northern ferry crossing used to be handled by the state and province. Recently, however, Ketchikan and Prince Rupert have been the ones handling the financing for the dock.
B.C. Ferries has worked with the Alaska Marine Highway System to allow Alaska ferries docking permission on the B.C. Ferries dock.
The city has been trying to balance the costs of keeping the dock up to date while trying to cover costs for other city endeavors. Keeping the Alaskan government happy on this issue has been vital for the city as it has tries to encourage more tourist dollars spent in town.
Studies that took place the summer following the sinking of the Queen of the North showed that decreased ferry traffic impacted tourism revenues not just in Prince Rupert but all the way along the circle route; including communities such as Smithers, Prince George and south to Vancouver.
But with the dock in serious need of permanent fixtures, city hall had feared that it might lose the dock unless federal funding was provided for repairing the dock.
The city started the work in 2006 after the Alaska Marine Highway System noted extensive damage to pilings, but failed to complete the work in 2007 after the budget shortfall.
"We believe that owning the dock has supported the continuation of service in Prince Rupert by the AMH and accordingly it has been beneficial to our community and to Alaska. However, (the city) would carefully consider any arrangement that support the AMH's continued presence in Prince Rupert," said Mussallem.
Posted by . at 1:33 am