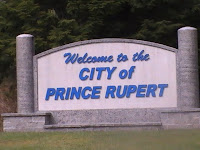 The police tape went up and the rumour began to fly around town on the weekend, with the RCMP restricting access to Butze's Rapids trail and parking lot on Friday, with the imaginations of Rupertites running fast at local coffees shops and grocery stores.
From theories of a body being found to other unsavoury activities, the fiction finally became fact by Saturday when the RCMP conducted a follow up search for dynamite, the item which was discovered on Friday and led to the closure of the parking area and trail.
Apparently discarded in an unsafe manner, the trail was closed so as to conduct the search for any further unwanted surprises.
The Daily News relayed the details in Monday's paper.
Dynamite closes Butze trail
By Kris Schumacher
The Daily News
Monday, December 01, 2008
Page three
Butze Rapids Trail was closed to the public during the weekend after Prince Rupert RCMP discovered a stick of dynamite near the parking lot.
At 9:45 a.m. on Friday, Nov. 28, police responded to a call from a concerned citizen who noticed the explosive, and both entrances to the trail off Highway 16 were barricaded. In order to ensure the explosive material was dealt with safely, the RCMP Explosive Disposal Unit was called up from Vancouver. As an added precaution the RCMP explosive detection canine unit flew up as well, in order to search the area for any other explosive devices or materials.
On Saturday morning, a search was conducted and nothing else was located. Constable Krista Vrolyk said the RCMP's investigation suggests that the dynamite was discarded there in an unsafe manner, but she said there was likely no destructive intent. Police are continuing a local investigation into how the dynamite ended up near the base of the popular walking trail.
Posted by . at 2:07 pm